My Comments: First of all, Happy Labor Day to everyone. I trust you are able to take some time off to spend with family or do something fun to celebrate the end of summer. I’m working very hard these days to complete a project that I call Successful Retirement Secrets (SRS). My plan is to find a way to reach out to the millions of people not yet retired, and share with them secrets I’ve discovered over the years.

These comments from Lance Roberts surfaced a couple of months ago, but they are even more relevant today. He has a lot of charts, some of which I’ve chosen not to include. I have put a link to his article at the end.

If you have money invested and are wondering how all this talk with North Korea might catch up with your retirement, this is good stuff. On the right of this page is where you can schedule a short conversation with me if you are so inclined.

I received an email last week which I thought was worth discussing.

“I just found your site and began reading the backlog of posts on the importance of managing risk and avoiding draw downs. However, the following chart would seem to counter that argument. In the long-term, bear markets seem harmless (and relatively small) as this literature would indicate?” 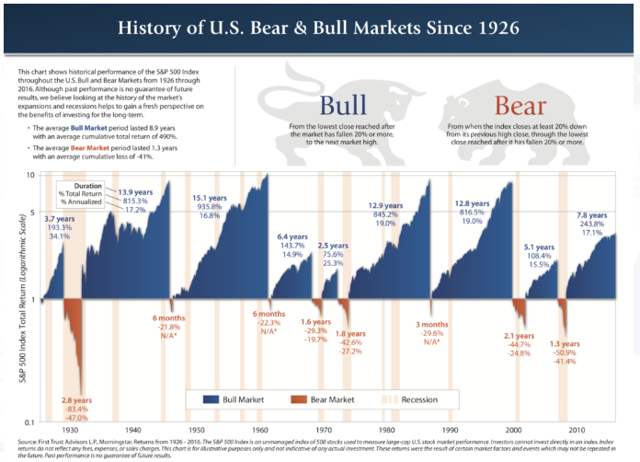 This same chart has been floating around the “inter-web,” in a couple of different forms for the last couple of months. Of course, if you study it at “face value” it certainly would appear that staying invested all the time certainly seems to be the optimal strategy.

The problem is the entire chart is deceptive.

The problem is you DIED long before ever achieving that 5% annualized long-term return.

Let’s look at this realistically.

The average American faces a real dilemma heading into retirement. Unfortunately, individuals only have a finite investing time horizon until they retire.

Therefore, as opposed to studies discussing “long term investing” without defining what the “long term” actually is – it is “TIME” that we should be focusing on.

Think about it for a moment. Most investors don’t start seriously saving for retirement until they are in their mid-40’s. This is because by the time they graduate college, land a job, get married, have kids and send them off to college, a real push toward saving for retirement is tough to do as incomes, while growing, haven’t reached their peak. This leaves most individuals with just 20 to 25 productive work years before retirement age to achieve investment goals. 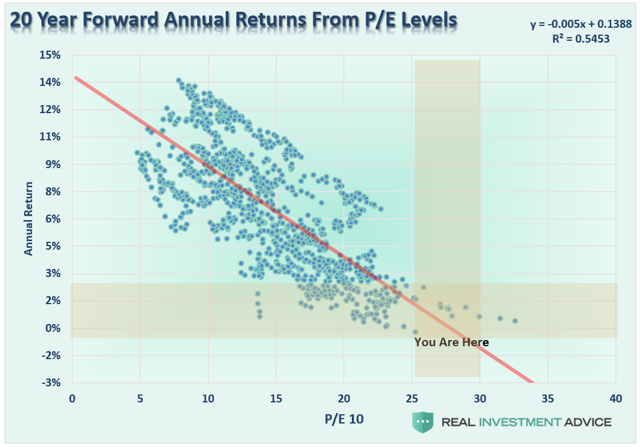 Outside of your personal longevity issue, it’s the “math” that is the primary problem.

The chart uses percentage returns which is extremely deceptive if you don’t examine the issue beyond a cursory glance. Let’s take a look at a quick example.

Great, an investor bought the index and generated a 700% return on their money.

See, why worry about a 50% correction in the market when you just gained 700%. Right?

Here is the problem with percentages.

Then the problem now becomes the issue of having to regain those 4000 lost points just to break even.

It’s Not A Nominal Issue

The bull/bear chart first presented above is also a nominal chart, or rather, not adjusted for inflation.

The first chart shows the S&P 500 from 1900 to present and I have drawn my measurement lines for the bull and bear market periods. 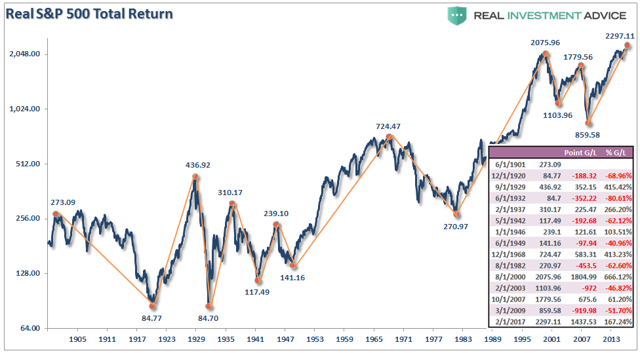 If you have discovered the secret to eternal life, then stop reading now.

For the rest of us mere mortals, time matters.

If you are near to, or entering, retirement, there is a strong argument to be made for seriously rethinking the amount of equity risk currently being undertaken in portfolios.

If you are a Millennial, as I pointed out recently, there is also a strong case for accumulating a large amount of cash and waiting for the next great investing opportunity.

Unfortunately, most investors remain woefully behind their promised financial plans. Given current valuations, and the ongoing impact of “emotional decision making,” the outcome is not likely going to improve over the next decade.

For investors, understanding potential returns from any given valuation point is crucial when considering putting their “savings” at risk. Risk is an important concept as it is a function of “loss.” The more risk that is taken within a portfolio, the greater the destruction of capital will be when reversions occur.

Many individuals have been led to believe that investing in the financial markets is their only option for retiring. Unfortunately, they have fallen into the same trap as most pension funds, which is believing market performance will make up for a “savings” shortfall.

However, the real world damage that market declines inflict on investors, and pension funds, hoping to garner annualized 8% returns to make up for the lack of savings is all too real and virtually impossible to recover from. When investors lose money in the market it is possible to regain the lost principal given enough time; however, what can never be recovered is the lost “time” between today and retirement.

Time” is extremely finite and the most precious commodity that investors have.

In the end – yes, market corrections are indeed very bad for your portfolio in the long run. However, before sticking your head in the sand and ignoring market risk based on an article touting “long-term investing always wins,” ask yourself who really benefits?

This time is “not different.”

The only difference will be what triggers the next valuation reversion when it occurs.

If the last two bear markets haven’t taught you this by now, I am not sure what will. Maybe the third time will be the “charm.”