My Comments: Are you a middle-class American? I used to be and may still be, but those like me are a dying breed. The economic devastation now engulfing a huge portion of Texas is going to reverbrate across the nation. Apart from the humanitarian crisis, it will add to the unseen crisis affecting middle class America.

Economic inequality led to the downfall of the Democratic Party last November. It’s manifest by the lower economic expectations of those who live in rural America, by those whose education is no longer enough to get ahead, and still pervasive social discrimination against those not white enough. To Trumps credit, he saw the problem and built a movement, even if he is likely to waste the opportunity.

Like many ‘economic’ essays, this may be hard for you to get through. But to the extent you want to preserve the underlying goodness of this nation, and protect yourself along the way, you would benefit from a better understanding of the problem.

Benjamin Disraeli is reputed to have said “There are three type of lies: lies, damn lies and statistics.”

Today let’s address the third component of Disraeli’s formulation in the context of a recent National Review article with the headline, “The Myth of the Stagnating Middle Class.” The article observes that “more Americans have easier lives today than in years past.”

To regular readers, this is a variant of the assertion that “common folk live better today than royalty did in earlier times,” a claim we debunked two years ago. The current argument is more nuanced in that it: a) relies on a few statistical twists; b) contains statements that are true but don’t support the main claim; and c) is an argument against Donald Trump’s populism from the political right. It all has the general appearance of plausibility until you start digging.

This is where we come in.

Let’s begin with the claim that more Americans have easier lives today than in years past. This is true and almost always has been. Progress is humanity’s default setting ever since our ancestors climbed down from the trees and began walking upright on the African savanna.

Thus, it should come as no surprise that the standard of living for all Americans has been rising for many years, mainly because of technological advances. However, the main issue under discussion is actually about how the economic benefits of the U.S. economy get apportioned across the populace.

In other words, how the wealth is distributed. The National Review engages in a statistical sleight of hand that distracts from this.

For further insight I spoke with Salil Mehta, who teaches at Columbia and Georgetown, and is perhaps best known for his role as the top numbers-cruncher in the federal government’s $700 billion TARP bank bailout plan in the financial crisis.

Mehta made short work of the article:
The article is a peculiar mixture of motivating facts and fantasy logic, which is what makes cherry-picking statistics unsafe for policy conversation. The main issue with the piece is that that it continuously mixes and matches data to fit a fated narrative.

Mehta further observed that the National Review argument included in some cases various classes of Americans (such as minorities and immigrants), while excluding them at other times in statistics. This kind of data cherry-picking is always a red flag.

Consider for a moment how the Pew Research Center did its big research report, “The American Middle Class Is Losing Ground”: The report, which actually figures in the National Review article, analyzed the Current Population Survey from 1971 to 2015. It used data drawn from the Bureau of Labor Statistics, which has well-established standards for managing data and making empirical comparisons.

Maybe it’s best to make the point with two of the more telling charts in the report. Here’s the first one, showing that income growth for the middle class has trailed that of the upper class: 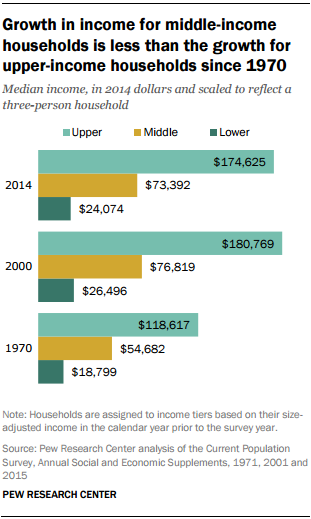 The second chart (below) shows that the wealth gap between the upper and middle classes also widened significantly (even after the losses from the financial crisis): 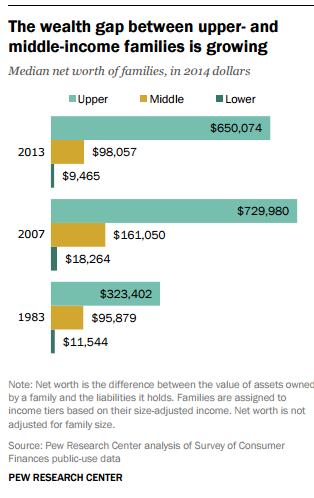 Best practice in these circumstances is to go to the original data source, cite it and analyze it in a way that is consistent, regardless of whether the outcome supports your conclusion.

As I’ve said before, there are many reasons to dislike this economic recovery: it has been lumpy and unevenly distributed by geography, by industry and by level of educational attainment. Much of that has harmed people who were once considered middle class. Add to this the decades-long impact of automation, globalization and the decline in labor’s bargaining power, and it adds up to economic stagnation for the middle class.

But wage and wealth stagnation alone don’t account for the full measure of middle-class angst. Inflation and its components also play a part. Prices for things we want have been deflating, while the cost of things we need have been going up. Mobile phones, computers and flat-panel TV are better and dollar-for-dollar cheaper than ever. The same is true for cars, which in a few years will likely be self-driving.

But those are mostly wants. When it comes to needs, it’s a different story. Housing, even after the 2008-09 crack-up, is expensive. Rentals have gone straight up as home ownership has fallen. The costs of education have skyrocketed and show no signs of slowing. Medical and health-insurance costs are among the fastest-rising of all consumer expenses.

Wishing that a problem doesn’t exist doesn’t make it vanish. But it does offer some insight into why the Republican Party was blindsided by the rise of Donald Trump and his populist appeal. It isn’t that the party elite was myopic, but that it actively fabricated a bubble into which no contrary information was allowed entry. The troubling thing is that the GOP is still at it.

Middle-class anxiety has been building for more than a decade and it mixed in the last election with a general sense of frustration with America’s leadership class. No wonder the middle class feels squeezed — because it is.