Different rules apply. Vanguard Funds founder John Bogle famously suggested that the bond part of your portfolio, presumably the ‘safe’ part, should be equal in percentage terms to your age. If you were 70, for example, 70% of your portfolio should be in bonds.

Demographics, interest rates, and the profusion of new financial products has largely put Bogle’s dictum to bed. But it does illustrate the continued confusion caused by those who fail to recognize the difference between someone in their 50’s working hard to accumulate a sufficient pile of money for retirement from someone in their 70’s trying to make sure they don’t run out of money before they run out of life.

We are currently conditioned to positive returns from the markets, except for 2015, that started as we emerged from the Great Recession of 2008-2009. Those of you in the distribution phase of your life need to heed the warning expressed here.

“We would expect the next decade to actually be very modest on the equities side in the U.S., a little less so in Europe and a little less so in Asia,” McNabb said in a Bloomberg Television interview that aired Thursday. “But it’s still overall lower than long-term historical averages.”

Stock markets reached a fever pitch in 2017 as the S&P 500 Index hit record highs and the rally has continued this year. The advance, buoyed by low interest rates around the world, economic growth and the U.S. tax overhaul, has sparked concerns that valuations have gotten stretched, spurring some investors to brace for a decline.

McNabb, whose firm oversees about $5 trillion, said long-term investors may benefit by holding balanced portfolios with bonds as well as stocks.

“No one can predict what’s going to happen in the next 12 months,” he said. “Having just said that, I’m sure the equity market will continue to skyrocket for the next few months.”

McNabb, who ceded the role of chief executive officer of the Valley Forge, Pennsylvania-based firm to Tim Buckley this month, spoke to Bloomberg in Beijing, where Vanguard is eager to take advantage of China’s opening to foreign financial-services companies. The country’s government said it plans to remove ownership limits on banks and allow overseas firms to take majority stakes in local ventures.

“With some of the changes, it looks like there may be a path to doing retail mutual funds, depending on how things get interpreted,” McNabb said. 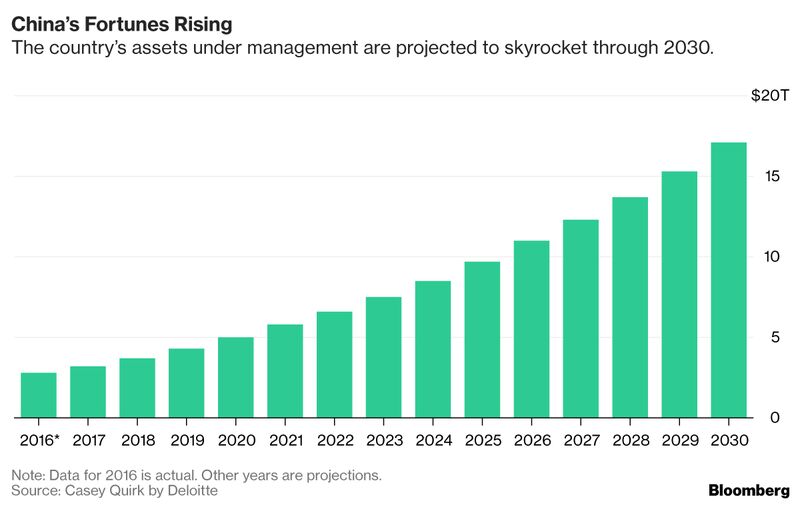 China’s assets under management are poised to climb more than fivefold by 2030 as the world’s second-biggest economy grows, according to estimates from Casey Quirk by Deloitte.