My Comments: Now that I’m in my mid 70’s, I’m far more worried about the ups and downs of the markets than I was 15-20 years ago. My ability to pay my monthly bills shrinks exponentially when the market crashes and my retirement money is exposed to that risk.

Ergo, I either do not have much money exposed to that risk, or I’ve repositioned it such that if there is downside risk, I’ve transferred that risk to a third party, ie an insurance company. You should consider doing the same.

BTW, QE means ‘quantitative easing’ and refers to the approach by the Federal Reserve to lower interest rates and to keep them low. That has  ended since the Fed is now slowly raising interest rates.

I’m completely out of the markets in the U.S., Europe and the U.K. It seems as clear as it can be that the market is in for a huge down.

Now there are permabulls and permabears and if you read my articles over the years calling higher highs in the Dow you might think I am a permabull. But I am not, and if you hunt enough you will find my articles calling the credit crunch back in 2006-2007 here on Forbes and again the post crash bottom to buy in.

It sounds simple, almost asinine, but it isn’t because most people have no view on market direction, or if they do it’s automatically ‘up.’ As such, most people do not know which way the market is going and as such are at more risk that they need to be.

So where are we now in the markets? 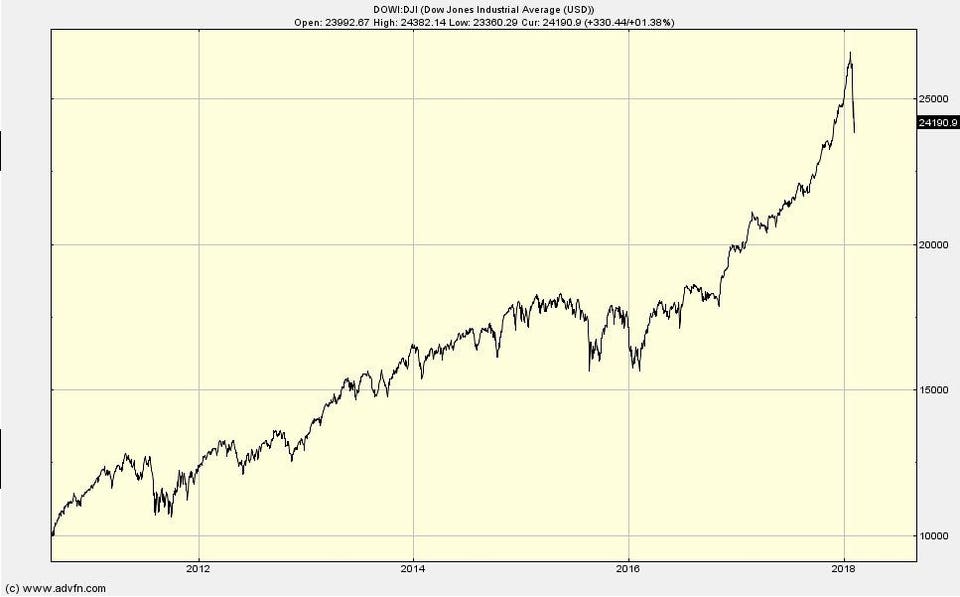 This is a terrifying chart for anyone who is long.

Why? Well, first off you can see the very characteristics of the way the market moves have changed for the first time in years. Up close it’s even clearer: 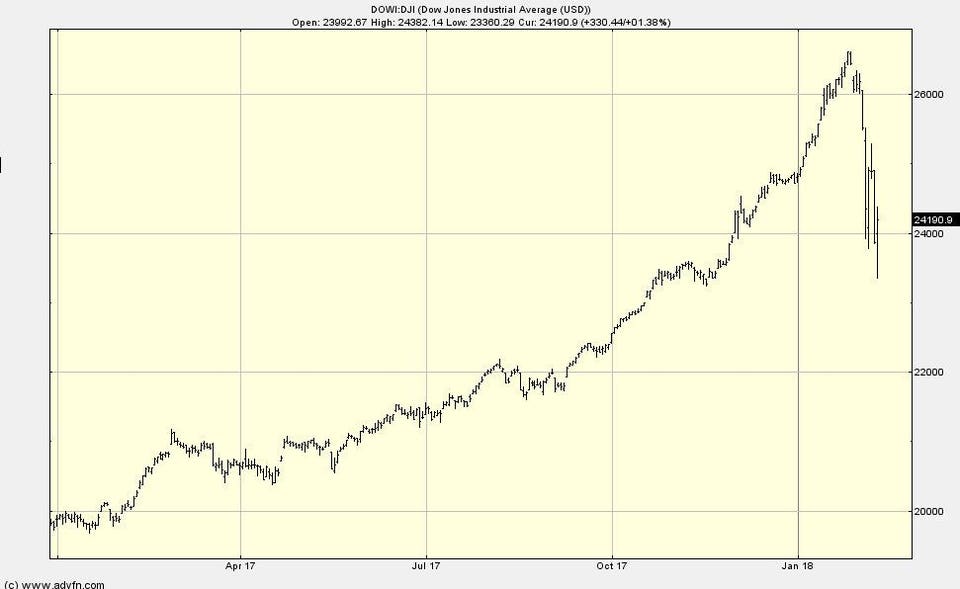 The market has been going up like an angel for a year, the volatility has fallen to nonexistant. Forget the tendency for the price to go parabolic, it’s the day to day footprint of the price action that’s even more important here. Now this style has broken. Something has smashed the dream.

This giant burst of volatility tells us that there is huge uncertainty in the market.

So ask yourself what that involves?

It involves a change of investment environment and the participants in the market fighting that change.

“Buy the dip” is the brain dead mantra that has harvested lots of profits through the era of QE ever-inflating stock prices. What if that stops working? The crowd ‘buys the dips’ but the negative environments rains on that parade and the market begins to shake as the two conflicting forces meet.

Who do you put your money on? The crowd or a new market reality?

I bet against the crowd every time; you cannot fight market systemics.

So what is this new reality? What is causing this? The pundits are unclear, spouting all sorts of waffle that would have been true last year but weren’t and must somehow now be the reason.
Amazingly, few can see the obvious. Where are the headlines?

QE made equities go up. Does anyone disagree?

‘Reverse QE’ is making it go down. Reverse QE is where the Federal Reserve starts to sell its bond mountain for cash. It pushes up interest rates, it sucks money from the economy and straight out of the markets.

Is that ringing any bells?

Reverse QE started in September and month by month is ratcheting up. By next September it will hit $50 billion a month from the starting point in September of $10 billion.

The market is crashing because reverse QE is biting and it is going to bite harder.

There is trillions of dollars of reverse QE to come. Years of it.

Now I suppose it is hoped that U.S. fiscal loosening, tax cuts and overseas profitability repatriation will counterbalance this huge liquidity hit, but for sure this new cash will not flood straight into equities. I’m sure a strong economy is meant to pump liquidity into the loop via profits too, but will these do anything but hold the stock market at a flat level for many a year?

However, this is ‘unorthodox monetary policy’ in reverse. Do you remember when QE was called ‘unorthodox?’ Well, we are back in unorthodox territory again and this is not the happy slope of the mountain of cash, this is the bad news bloody scrabble down the other side with trillions of less money all around.

Somehow this ‘unorthodox’ unwinding of liquidity is aiming for a smooth transition. Well, they are going to need good luck with that and it looks like the process is having a rough start.

So reverse QE could stop. The Fed could halt the program. However, it seems unlikely they would pull the plug on the whole program that fast and then what? First they’d have to take the blame for crashing the market, then they would have to tacitly admit they are stuck with mountains of debt that they will have to roll forever.

That means reverse QE is going to have to punch a far bigger hole in the market than we have seen before it hits the headlines. So where is that? 20,000 on the Dow, 18,000?

Well that’s my feeling, which is why I am cashed up.

So take a look at the chart and remember that reverse QE is here and until further notice the Fed is shrinking its balance sheet, which means one thing… The market is going down.

All of a sudden knowing which way the market is going doesn’t seem so asinine.