It may sound simple, but making it happen for you may be very complicated. I think we’d all like less stress in our lives, but taking one simple step today to eliminate a major stress point in our future may be unrealistic.

Nevertheless, this is worth thinking about. And if you can get yourself committed to the idea, and not get sidetracked, you could very well be ahead of the curve and ahead of your contemporaries down the road as your life plays out.

“Eventually, I’ll stop working.” Most of us think that and know it will happen, but millions of us worry whether we’re saving enough to live on once we do. We want to know: How much of my earnings should I set aside? What’s the magic number? 3%? 5%? 10%? More?

What your financial adviser won’t tell you:

Unfortunately, the retirement industry has spent decades largely avoiding the magic-number question. “There’s no magic number for everyone,” some say. “It’s complicated,” say others. And then they offer, sometimes for a fee and sometimes for “free,” to take our money and invest it for us — often without telling us whether it’ll be enough when the time comes.

Why will no one give us a magic number? They don’t want to be legally responsible when the number turns out to be too low, which, for some of us — especially those whose pay is low or whose investments are poor or who live long and need a nursing home for years — it will. The legal jitters are understandable, but they leave us in the dark about how much to save.

Don’t give up hope. There’s research that can help — from institutions that don’t have a conflict of interest because they don’t invest or give advice. My favorite is the Employee Benefits Research Institute in Washington, D.C. EBRI, as it’s called, gathered anonymous information on tens of millions of people and how they actually save. It won’t tell people what to do, but from its research there’s a pretty useful rule of thumb for young people: Count on your fingers and …

Of course, there will be times when you’re between jobs or you need your money for a pre-retirement-age emergency. In those cases, you can put your money in a Roth individual retirement account (IRA) account. That way, you can take your contributions out without penalty. (There are also Roth 401(k) accounts, though they have more complicated withdrawal rules.) Don’t let the fact that you might need money someday keep you from saving for retirement now.

It’s perfectly OK to consult a financial adviser and get more personalized recommendations, but if you can’t or don’t want to — or while you’re waiting to “get around to it” — set aside enough so that, together with your employer match, you’re putting aside at least 10%.

America’s No. 1 fear: golden years minus the gold

People are living longer. That’s both good news and bad: We hear about baby boomers moving into posh “active adult” communities, but we also hear about disabled and bedridden elderly requiring years’ worth of health aides and the constant help of their children. Either way, longer lives seem expensive.

And our capacity to lay the groundwork for retirement can feel pinched from all directions. Life can be expensive even in our earning years, with college tuition, housing and medical costs in the stratosphere. Student loans and credit-card debt intrude. Social Security, we’re told, is at risk. Lifetime pensions are, for most, a thing of the mythical past. All that most of us feel we can count on is a retirement account that’s at the mercy of the markets and, we suspect, doesn’t have enough in it. Many, of course, don’t even have that.

Experts often tell us how complicated this is to figure out — and why we should hire them to do it for us. And it is easy to make it complicated: We can try to decide — now, decades before we’re ready to even think about retiring — what our future earnings will be and how long we’ll work, what lifestyle we’d prefer in retirement, how much health care will cost decades down the road, how long we’ll live after retirement (with a margin for error, of course), how our money should be invested and what our investment returns will be (with, again, a margin for error). Not complicated enough? Add whether or not we’ll need funds at hand to support children or parents or other family members.

The result is confusion. Some people get financial advice. Others turn to online retirement calculators. Many, sadly, do nothing at all, falling back on a vow of resignation: “I’ll just keep working.” (Spoiler: Almost no one who says they’ll work until they die ends up doing so.) For still others, it means saving too little.

How can EBRI’s model help? It estimates the risk of running out of money after retirement by taking into account many more factors than the usual online calculator: contributions, market changes, Social Security benefits and salary growth, as well as a range of health outcomes and longevity prospects. It can then estimate the risk that — for particular savings rates and income levels — a person’s expenses in retirement will overwhelm their savings plus Social Security benefits. 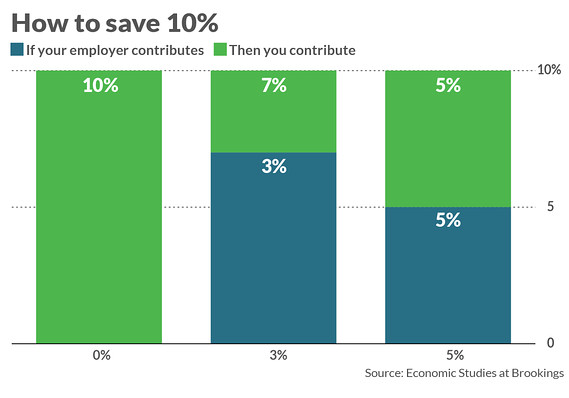 We then applied EBRI’s projections to three millennials. Their names have been changed, but they are all in their mid-20s. We’ll assume they’re average earners:

Are they contributing enough, too much or too little? Here’s how, based on EBRI’s model, our millennials and their different savings practices would end up at retirement: 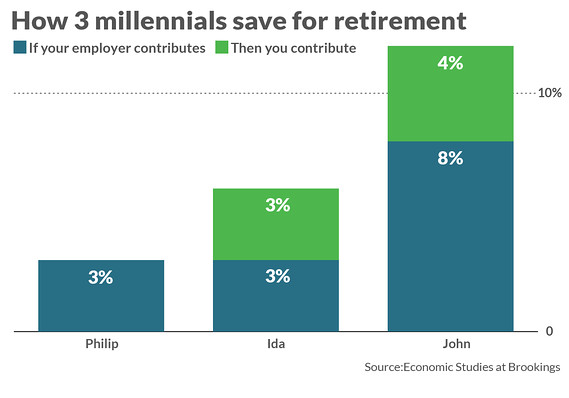 Overall, the EBRI simulation model suggests that, in the income ranges of most millennials, a contribution rate of 10% starting in a worker’s mid-20s cuts the risk of running out of money in retirement to about 30%, less than one chance in three. Contributing more than 10% when you can will give you a better cushion.

Of course, everyone’s situation is and will be different, so 10% is a guideline, not a guarantee. (Furthermore, if you start later in life, 10% won’t be nearly enough.) 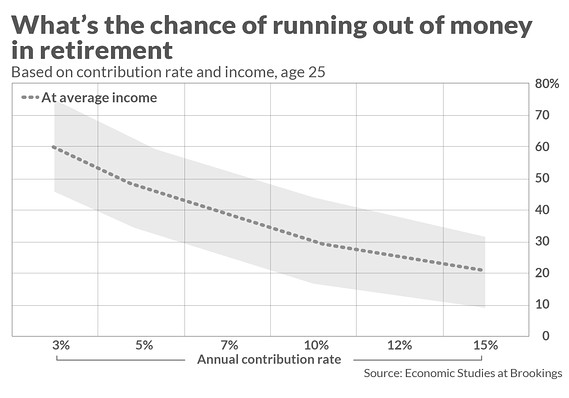 By now you’re probably thinking, “This is easier said than done.” And you’re right. Saving for retirement is like dieting in that we’re better at making resolutions and excuses than making progress.

But technology makes the savings part easier, too. More and more employer plans will sign you up automatically. If your employer doesn’t have a plan, you can set up a Roth IRA with a bank or an investment company and have a portion of each paycheck deposited automatically. Some states, including Oregon, Illinois, California and Maryland (whose program I chair), are setting up IRA programs for small businesses that don’t offer retirement plans.

The good news is that, in one respect, retirement saving is easier than dieting: If you fall off the wagon, you can start again and feel better immediately.

Yes, life is complicated. Retirement plans don’t always turn out as planned. But if, while worrying about everything else, we each adhered to the 10% rule as much as we are able, there would be a lot less retirement insecurity and a lot more gold in the golden years.