My Comments: I post this because you and I have the power to make sure the Social Security safety net is fixed so it remains viable well into this century.

To make that happen, we have to put pressure on those whom we elect to represent us at the Federal level. It was last fixed in 1983 and no one alive today can realistically echo the common refrain in those days that the fix would end life as we knew it. It caused a ripple and bought the system another 40 – 50 years.

There’s no reason we can’t make something similar happen again. But as the electorate, we have to make sure the people we elect are very afraid if they don’t find a fix. It’s not an unrealistic outcome, but it’s up to us to create the political will necessary for them to make it happen.

Getting older can be tough, and it’s going to get even harder.

Social Security, the government benefit program designed to keep elderly, the disabled and other vulnerable populations out of poverty, doesn’t even cover half of living expenses in 45 states (46 if you include Washington, D.C.), according to data compiled by HowMuch.net. In Hawaii, Social Security covers the least (26.7%), and even in Arkansas, where Social Security covers the highest percentage of living expenses — including median rent, average grocery bills, utilities, transportation and health care costs — at 52.9%, it barely covers half. 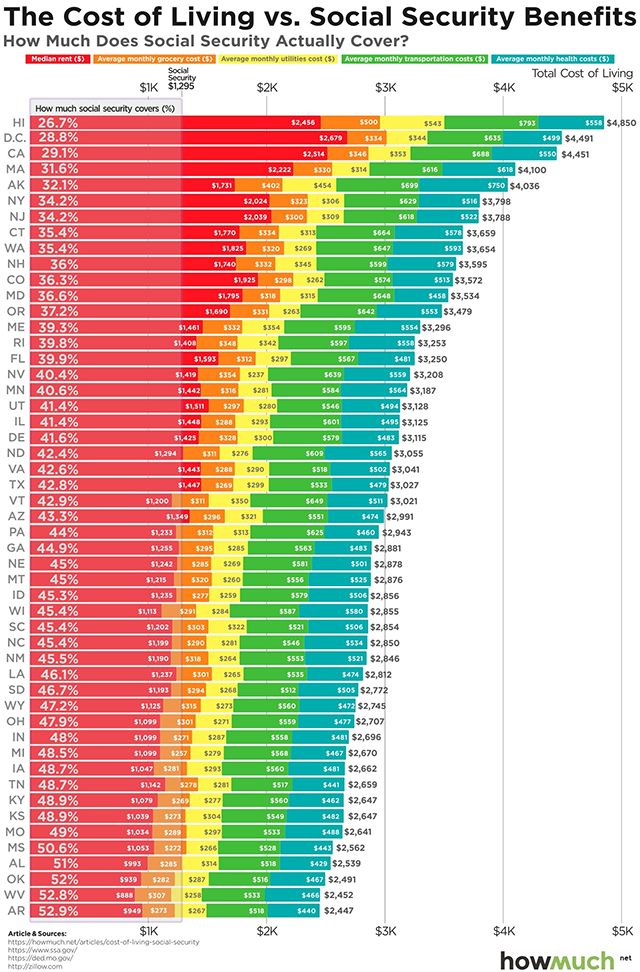 Now, Social Security was never meant to be a recipient’s only income. It was signed into law in 1935 by President Franklin Roosevelt, it was created as a safety net for people who had no other support. Workers pay into Social Security through paycheck deductions and when they become eligible, the government makes distributions. There are currently 43.2 million retired workers receiving Social Security benefits, with an average monthly check of $1,414.73, according to July 2018 data from the Social Security Administration.

The problem retirees are facing now? Many haven’t saved enough for retirement so they need Social Security to maintain their lifestyle.

The even scarier problem coming for America? The Social Security trust fund is expected to be exhausted by the 2030s, meaning those monthly benefits would be cut. On top of that, workplace defined-benefit plans (pensions) are disappearing, replaced by employer-sponsored defined-contribution plans (such as 401(k) or IRA accounts), of which less than half of private-sector workers had access to in 2016, according to the Center for Retirement Research at Boston College. And that’s down from 64% in 1999. The Government Accountability Office says 29% of Americans have no retirement savings at all.

The new data from HowMuch.net joins the chorus of voices warning that Americans are frighteningly unprepared as they head into retirement and old age. And dwindling Social Security will be less helpful in bridging the gap for older Americans. That’s a problem no matter which state you live in.