My Comments: Demographics is an economic force to understand. Without people, growth and prosperity will diminish. Neither children nor the elderly can be counted on to work the fields and build houses. That leaves people in the middle and unless we grow them at home, we have to import them from somewhere else. That means rational immigration laws and not walls.

After years of relying on monetary policy to stabilize the U.S. economy, policymakers have redoubled their commitment to stronger pro-growth fiscal policies. As post-election Washington sets its sights on growth-oriented reforms, policymakers should remember that economic growth in any nation is determined by the four basic factors of production—land, labor, capital, and entrepreneurship. These essential inputs to economic output are far from abstract concepts, but represent the basic, essential, and exclusive elements to growth. Every government policy decision affects them in one way or another, and success in maximizing economic output relies upon optimizing each input.

The first input to growth requires responsible use of our land and other natural resources. It is easy to understand how a nation rich in land, water, minerals, oil, gas, and timber, can benefit from the responsible use of these resources. The reemergence of the United States as the world’s largest energy producer is reducing the cost of living for consumers and creating millions of new jobs in resource-related industries. Nonetheless, sound policy decisions must include the sustainability of our natural resources by ensuring practical environmental regulation assures a safe and secure ecological balance. Our land and resources are precious and limited. We must ensure the growth pursued today does not damage the opportunities for development available to future generations.

Labor is the work that all employed people contribute to the production of goods and services. Essentially, a larger, more productive workforce delivers greater output. One of the greatest challenges facing American labor is a sharp slowdown in its growth rate. Overall U.S. population growth has slowed, reflecting a combination of declining fertility rates and slower net immigration inflows. As a result, the domestic labor pool is projected to increase by an anemic 0.5 percent per year over the next 20 years, compared to growth rates of over 2.5 percent in the 1970s. The U.S. population is also aging. In 1960, 38.6 percent of the U.S. population was below the age of 20 and poised to drive future labor force growth, and 23.2 percent was 50 or older. By 2040, just 22.9 percent of the population will be younger than 20, and 38.8 percent will be over 50. In 1960, there were 5.1 workers for every Social Security beneficiary. Today, the worker/beneficiary ratio is down to 2.8, and is projected to be 2.1 by 2040.

To address these challenges, sound immigration policy should seek to attract young, foreign-born workers to the United States and incentivize them to stay. Deporting working-age immigrants who are making productive contributions to our country, or reducing the number of qualified immigrants allowed employment in our country, would hurt the already meager growth in our labor market, decrease total economic output, and reduce American and global living standards. An influx of young workers would help shore up our social welfare system to care for older Americans through incremental taxes and Social Security receipts while boosting total output of goods and services.

The third essential input to growing economies is capital. Capital investment turns money into economically productive assets like bridges, airports, roads, machinery, and equipment that serve to increase output. In the United States, infrastructure spending programs have the potential to fuel growth through direct construction spending and enhancing future efficiency. Imagine the productivity gains associated with improved mass transit or a 15 percent reduction in commuting time. Such ambitions, however, are not likely to be realized in any significant size without partnership from the private sector. In the persistently fiscally constrained environment, the government cannot foot the bill for meaningful infrastructure investment by itself. Hundreds of billions of dollars in private capital are already interested in investing in real assets, with trillions more sitting on the sidelines. Governments at all levels should incentivize private sector investment by reducing regulatory hurdles, developing new financing mechanisms, and offering attractive investment projects that meet the market rate of return expectations of private investors like pension funds and insurance companies.

The final factor of production, entrepreneurship, pulls the other factors together into a business enterprise that generates profits. Immigration policies can dramatically impact the quality of entrepreneurship in the U.S. economy. Immigrants account for a disproportionately high share of new business startups. Despite making up just 15 percent of the U.S. workforce, more than 35 percent of new businesses have at least one immigrant entrepreneur at the helm. The dynamic and creative entrepreneurs seeking to make their dreams come true in America provide economic benefits to all of society, and it is imperative that sound policies for work, education, and investment visas are developed with entrepreneurship in mind.

Policymakers would be wise to dust off their textbooks and review the basic inputs that support economic growth, the four factors of production—land, labor, capital, and entrepreneurship. Sound policies for sustainable development, immigration, and public/private infrastructure investment will have the greatest impact on economic growth for the world’s largest economy, both today and for future generations. 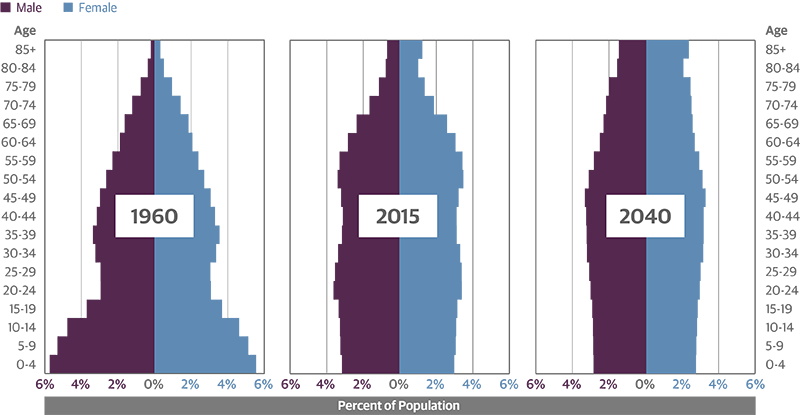