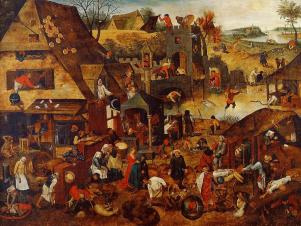 My Comments: Before you criticize me for posting what appears to be a political comment, consider what I think is the takeaway phrase from the following dialog: “Trump doesn’t matter, Trump’s voters do”.

There’s a reason there are so many pissed off people on both sides of the Atlantic. And unless and until our elected leadership takes steps to understand the anger and develop policies and solutions to mitigate that anger, we’re all going to get sucked further into a black hole.

David Frum, the Canadian-born conservative, has been writing about politics here and abroad for many years. His books and essays, going back to Dead Right in the mid-1990s, offer a critique of the modern conservative movement that is often withering. A former staffer in the George W. Bush administration (where he helped coin the phrase axis of evil), Frum, after leaving government, had a falling out with his bosses at the American Enterprise Institute. He is now a senior editor at the Atlantic.

Despite his reputation as a moderate, Frum is actually very conservative on subjects such as foreign policy and immigration. It was the latter that I wanted to discuss with him this week, in the wake of the Brexit vote. (He is chairman of the board of the British center-right think tank Policy Exchange; the views he expresses in this interview, however, are his own.) Over the course of our conversation, which has been edited and condensed for clarity, we discussed how conservatives should view immigration, the real grievances behind the Brexit vote, and the post-Trump Republican Party.

Isaac Chotiner: You wrote that you thought Angela Merkel was the person most responsible for Brexit. Why?

David Frum: Immigration has been a large and accumulating problem in the United Kingdom. It involves competition for jobs to a lesser degree; competition for social services; pressure on hospitals; pressure on housing, especially the incredibly expensive South of England. Of course, also in the U.K., migration has a very large security element in a way that is not true here. A lot of the migration to Britain from the Middle East was Britain’s own decision, because half the migrants to Britain that come are non-EU people, admitted through the British system. The people who Merkel admitted, once they get papers, will be able to move anywhere in the EU.

Presumably they would come for jobs though, yes?

Right, the point is that more than half of all the net new jobs created in Europe are created in the U.K. What that means is they’re created in the Southeastern corner of England. That is the mightiest job magnet on the whole European continent. It’s sucking in labor from the whole continent. So those 1.1 million people that landed and submitted in 2015, and a lot more in 2016, once they get the right to reside in Europe, some will end up in Germany, some will probably go to Sweden, a lot will end up in England.

You mentioned the southeastern corner of England, which is where London is, but that is the area that voted “Remain,” no?

Right. This is sometimes represented as a completely irrational action. Is it so irrational? All these jobs are being created in the Southeast of England. So there you are, living in some formerly industrial town in the North, and you’re thinking, maybe I should move. Maybe I should leave this town and move to London and look for work. When you make that decision, you look at the prices and you say, “There’s no way I can afford housing in the Southeast of England. When I make inquiries about looking for work, they’re much happier with the labor they’re getting from the Poles, who by the way are willing, in order to get settled, to live eight to a house.”

Yeah. I was also somebody who hoped that Britain would remain in the EU, and I have a lot of respect for the EU project. There’s a lot about it that’s annoying and bureaucratic, but in the end, it’s a really important and beneficial and to some degree inspiring thing. In the same way that global free trade is that. We’ve been operating for a long time on the idea that, if you’re in favor of the free movement of goods, then you should be in favor of the free movement of capital and the free movement of people. They’re all the same thing. It may be that when we try to have all three of those things, we end up with none of them.

But it does seem like this issue has gotten to a point where the whole debate has been influenced by inflammatory racial rhetoric. How do you have the conversation when that is the case?

Look, it’s not a binary issue. The choice is not no immigration or open borders. It’s a question of how much, and what kind. It’s true that the immigration debate attracts racists. It also attracts romantic ideologues of all kinds. When you tell a country, when you tell people in the country, that the only people who deal with the problem you care about are the fascists, they are going to say: “Who are these fascists of who you speak, and what is their phone number?”

That’s really, I think, the lesson of Brexit and Trump: When your country has a problem, responsible people have to address it in a responsible way. If they refuse, the problem doesn’t go away. Oh well, your conscience doesn’t allow you to address this issue. No, they’re going to hire a Donald Trump or exit the EU and break up the European Union.

I think one liberal response to that would be, well, people on the right who are worried about this issue should do more to get racists out of their ranks.

Look at what’s happened in the U.K. I don’t think Brexit is a racist reaction. Brexit is not a racist thing. The immigration issue did not express itself like George Wallace; it expressed itself in this kind of labor-protectionist way that was as attractive to people, more attractive in many ways to the people on the left than the people on the right.

You also had Nigel Farage and so on.

If we’re trying to protect the good things in globalization, that is not only challenged by people on the far right. Podemos just had a bad election in Spain, but there are a lot of these reactionary movements that present themselves as being on the left and present themselves as being anti-racist, but they’re profiting from the strains created by too rapid change. Their agenda is going to be destructive of the open society that conservatives and liberals alike want to conserve. Each for their own reasons.

How do you think Trump has changed the immigration debate here?

This is one of my concerns about him, one among many. I fear what he’s done is he’s made this debate so polarizing and so toxic. How do you rescue something from the likely wreckage of the Trump campaign? He didn’t offer anything useful, but he was speaking to something real. To a great extent he was exploiting it, but it was still real.

So you think he has made the task of discussing it harder?

Yes, right, and he’s also locked Democrats and liberals into an immigration solution much more extreme than they had a decade ago. So now Obama’s immigration executive actions are a baseline position.

You started writing about Trump early and were an early critic, but has anything surprised you about the last few months of his campaign?

Who hasn’t been caught by surprise again and again? I did not believe he was going to win the nomination. I thought that something would happen that would cut off this obviously self-destructive adventure. So the fact that he won the nomination surprised me. The fact that he’s still on his way to being the Republican nominee, I never stop finding that surprising. The fact that the Republican Party didn’t … Trump is a kind of opportunistic infection and the fact that the patient didn’t have strong antibodies—that to me is a real surprise.

Did you think he’d be able to pivot in a way that he hasn’t?

No, no. You can’t stop being the person you are.

It seems to me that one possible advantage that he’s blown is the idea that he could benefit from some sort of outside event. It seems like the degree of his solipsism has prevented that from happening. We’ve had an awful attack by an ISIS-inspired attacker and economic uncertainty. He’s reacted to both in such a bizarrely solipsistic way.

He had some elements of a wider populist appeal on health care and on social insurance generally, which appealed to some more middle-class people. That seems to have been dropped. We don’t hear him anymore defending Social Security and Medicare. He may do it again. As he’s proceeded, his campaign has become ever more about himself and whether people are nice to him or not.

Do you think the Republican Party is going to try to stay away from Trumpism, assuming he loses? Or do you think we are likely to see a figure rise by saying, “We need to move the party more in a populist-nationalist direction?” We just need somebody who is 20 percent less rough around the edges.”

I’m not going to predict that because that’s going to be the debate that we’re going to have. Republicans are at risk, though, of having a debate between two positions that can’t work. Some people are saying that the real lesson of Trump is that we need to double down on pure ideology.

Which is the lesson they normally draw after a loss.

Right, whatever the Wall Street Journal editorial page says, plus 15 percent. Those who have gotten close to Trump, they’re going to present him as what—a victim of his own tax lawyers and media bias?—but not ask the question: Hey, how did anybody ever imagine this as anything other than a catastrophe in the making? What I hope we can discuss is: Trump doesn’t matter, Trump’s voters do. How do we talk to them? They just told us something unusually important about a big section of American life. They’re in a lot of trouble. They wanted bread, they demanded bread, and they got a stone. Someone needs to offer them something that can do them some good.