Like a broken clock that’s right twice a day, I’ve been expecting a market crash for going on four years now. Will I ever be right?

Most of us in the world of money don’t believe it’s different this time. And while none of us has a crystal ball, we’re almost unanimous there’s a bear market just around the corner. The problem is we’re not sure where the corner is.

This article by Lance Roberts has a lot of interesting charts. He gives us a better way to think about the inevitable ups and downs in the market and blows up some long held myths. The older you are today, the more critical is an understanding of what he’s telling us.

Instead of bringing it all to you, I’m going to give you a glimpse into what he’s saying first. If you’re looking to retire, or perhaps are already retired, you need to follow this closely. And reach out to me if you want to explore a way to stay invested and limit your losses. Read this too: https://tinyurl.com/y6e569p8

Go to the the link at the bottom behind the palm tree. You’ll be glad you did.

At the beginning of this year, I was at dinner with my wife. Sitting at the table next to us was a young financial advisor who was probably in his mid-30s, meeting with his client who appeared to be in his 60s. Of course, the market had just experienced a 20% correction from the previous peak, and the client was obviously concerned about his portfolio.

“Don’t worry, there is always volatility in the market, but as you can see, even bear markets are mild and on average the market returns 8% a year over the long-term.”

Here is the chart which shows the PERCENTAGE return of each bull and bear market going back to 1900. (The chart is the S&P 500 Total Return Inflation-Adjusted index.) 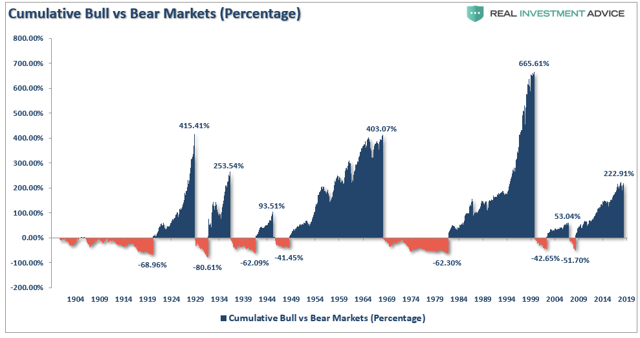 Here is the narrative used with this chart.

While the statement is not false, it is a false narrative.

Here are the basics of math.

This is the error of measuring returns in terms of percentages, as it masks the real damage done to portfolios during a decline. To understand the real impact of bull and bear markets on a portfolio, it must be measured in POINTS rather than percentages. 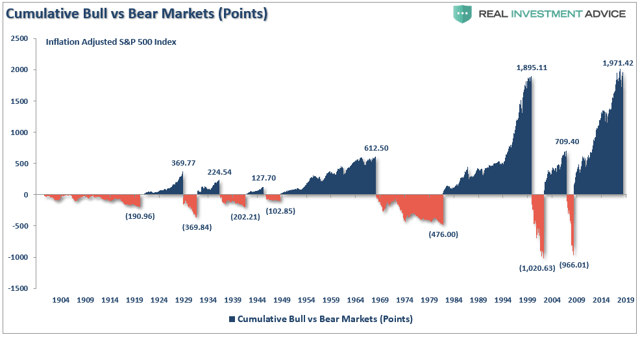 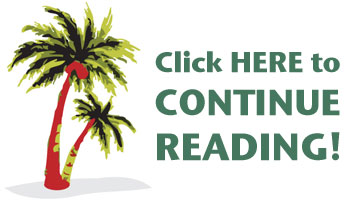