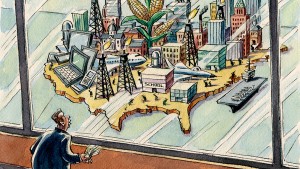 My Comments: Few of you reading this are confused about my politics. So I share these words with you as someone trained in economics and finance who has been an entrepreneur in financial services for over 42 years.

Our society gives us, via the Constitution, the ability to express which values are important to us and which are not. Most of us do this by voting whenever there is an opportunity. The dilimma we face today is that we have someone in the White House who exhibits virtually no degree of intellectual curiosity or a motivation beyond his own personal self interest.

For me, what I see is a degree of corruption and dishonesty that has the potential to make life very difficult for my children and grandchildren. And for that I’m angry.

I keep hearing that although Trump is a scoundrel or worse, at least he’s presiding over a great economy.

As White House economic adviser Larry Kudlow recently put it, “The single biggest story this year is an economic boom that is durable and lasting.”

Really? Look closely at the living standards of most Americans, and you get a very different picture.

Over 80 percent of the stock market is owned by the richest 10 percent of Americans anyway, so most Americans never got much out of Trump’s market boom to begin with.

The trade wars are about to take a toll on ordinary workers. Trump’s steel tariffs have cost Ford $1 billion so far, for example, forcing the automaker to plan mass layoffs.

What about economic growth? Data from the Commerce Department shows the economy at full speed, 4.2 percent growth for the second quarter.

But very little of that growth is trickling down to average Americans. Adjusted for inflation, hourly wages aren’t much higher now than they were forty years ago.

Trump slashed taxes on the wealthy and promised everyone else a $4,000 wage boost. But the boost never happened. That’s a big reason why Republicans aren’t campaigning on their tax cut, which is just about their only legislative accomplishment.

Trump and congressional Republicans refuse to raise the minimum wage, stuck at $7.25 an hour. Trump’s Labor Department is also repealing a rule that increased the number of workers entitled to time-and-a-half for overtime.

Yes, unemployment is down to 3.7 percent. But jobs are less secure than ever. Contract workers – who aren’t eligible for family or medical leave, unemployment insurance, the minimum wage, or worker’s compensation – are now doing one out of every five jobs in America.

Meanwhile, housing costs are skyrocketing, with Americans now paying a third or more of their paychecks in rent or mortgages.
Trump’s response? Drastic cuts in low-income housing. His Secretary of Housing and Urban Development also wants to triple the rent paid by poor households in subsidized housing.

Healthcare costs continues to rise faster than inflation. Trump’s response? Undermine the Affordable Care Act. Over the past two years, some 4 million people have lost healthcare coverage, according to a survey by the Commonwealth Fund.

Pharmaceutical costs are also out of control. Trump’s response? Allow the biggest pharmacist, CVS, to merge with the one of the biggest health insurers, Aetna — creating a behemoth with the power to raise prices even further.

Commuting to and from work is becoming harder, as roads and bridges become more congested, and subways and trains older and less reliable. Trump’s response? Nothing. Although he promised to spend $1.5 trillion to repair America’s crumbling infrastructure, his $1.5 trillion tax cut for big corporations and the wealthy used up the money.

Climate change is undermining the standard of living of ordinary Americans, as more are hit with floods, mudslides, tornados, draughts, and wildfires. Even those who have so far avoided direct hits will be paying more for insurance – or having a harder time getting it. People living on flood plains, or in trailers, or without home insurance, are paying the highest price.

Too often, discussions about “the economy” focus on overall statistics about growth, the stock market, and unemployment.

But most Americans don’t live in that economy. They live in a personal economy that has more to do with wages, job security, commutes to and from work, and the costs of housing, healthcare, drugs, education, and home insurance.

These are the things that hit closest home. They comprise the typical American’s standard of living.

Instead of an “economic boom,” most Americans are experiencing declines in all these dimensions of their lives.

Trump isn’t solely responsible. Some of these trends predated his presidency. But he hasn’t done anything to reverse them.

If anything, he’s made them far worse.