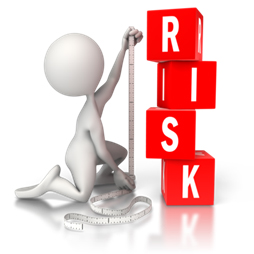 My Comments: I wasn’t here in 1929 but I was here in 2000. If there is such a thing as handwriting on the wall, you should be able to see it. We’d had a great run up and the year 2000 was just around the corner. Everyone was worried that our computers would crash because years were constructed around the last two digits and all of a sudden, both would be ZERO.

As it happened, nothing happened, except the run up suddenly stopped and everyone had to take a deep breath. And quit buying new stuff with all the money we didn’t have anymore since we’d spent it already. And the market crashed.

“The stock market is now 35% passive and 65% terrified,” says financial adviser and blogger Josh Brown, a.k.a. “The Reformed Broker.” In other words, more investors nowadays are indexing their money and active managers fear for their futures.

Which begs the question, did Brown get it backwards? Should the 35% of stock investments that’s indexed actually be the terrified money? Yes, James Montier and Matt Kadnar of Boston-based asset manager Grantham, Mayo, van Oterloo (GMO) assert in a new paper called “The S&P 500: Just Say No.” The S&P 500 SPX, +0.17% is so expensive, they say, any money tracking the benchmark U.S. stock market index at this point is more speculation than investment.

Here’s how the authors put it: “A decision to allocate to a passive S&P 500 index is to say that you are ignoring what we believe is the most important determinant of long-term returns: valuation. At this point, you are no longer entitled to refer to yourself as an investor. You may call yourself a speculator, but not an investor.

“Going passive eliminates the ability of an active investor to underweight the most egregiously overpriced securities in the index (we obviously prefer a valuation-based approach for stock selection as well). When faced with the third most expensive US equity market of all time, maintaining a normal weight in a passive index seems to us to be a decision that will likely be very costly. Yet despite this, it remains a popular path, with around 30% of all assets in the U.S. equity market in the hands of passive indexers.”

By contrast, those same inputs have contributed 2.8%, 3.1%, 3.2%, and 3.8% to the index’s stunning 13.6% annualized real returns over the past seven years. In other words, the current rally is being carried by unusually high and persistent profit margins and multiple expansion, or the amount investors are willing to pay for earnings.

For recent returns to persist, profit margins and P/E multiples must continue to expand. That’s unlikely since both of these components are near all-time highs. GMO uses these four components to try to peer into the future by analyzing the historical cycle of profits, and the firm’s forecasts often resemble the signals of Robert Shiller’s “cyclically adjusted PE ratio” or CAPE, which compares current stock prices to the past decade’s worth of real earnings.

Basically, GMO thinks that U.S. stocks over the coming seven years will lose 6% due to P/E multiple contraction, and another 2.8% from margin contraction. While dividend yield and profit gains will contribute 5% to stock returns,, that still amounts to a real total return of -3.9% for the period.

Even assuming the current P/E ratio and profit margins are normal doesn’t allow for the computation of continued robust returns since P/E and margin expansion account for such a large part of recent gains. Basically, this is the third-most expensive U.S. market ever. The only times stock prices have been higher and prospective returns lower were in 1929 and 2000. A different cyclical adjustment that fund manager John Hussman uses shows the current market as the second-most expensive one.

Finally, Montier and Kadnar run a Benjamin Graham-style stock screen based on four criteria: Earnings yield twice the AAA bond yield; dividend yield two-thirds of the AAA bond yield; total debt less than two-thirds of tangible book value, and Shiller PE of less than 16x. They find no U.S. stocks currently meeting those criteria. The authors quote Graham: “When such opportunities have virtually disappeared, past experience indicates that investors should have taken themselves out of the stock market and plunged up to their necks in U.S. Treasury bills.”

Even allowing for the fact that large U.S businesses are exhibiting monopolistic tendencies, and profit margin cycles appear different lately than in the past, Montier and Kadnar argue that stocks still aren’t cheap.
The upshot is that investors should have as little exposure to U.S. stocks as possible. Foreign stocks don’t offer compelling returns either, but they are priced to deliver at least somewhat higher returns than U.S. stocks. That’s especially true for emerging markets stocks.

While investors who seek relative value must venture abroad, those investing on more absolute terms should hold some cash. “When there is nothing to do, do nothing,” advise the authors. Both relative and absolute value investors should remember economist John Maynard Keynes’s remark that they will necessarily seem “eccentric, unconventional, and rash in the eyes of average opinion.”