But were not yet close enough to the edge of the cliff for there to be the necessary political will to fix it.

You have to remember, things only get done within the context of ONE ELECTION CYCLE. Absent that pressure, the can gets kicked down the road. The remedy won’t likely appear until 2030. If then.

The current and projected financial state of Social Security

According to the 2016 Social Security Trustees Report, the most recent available, the Social Security trust fund had roughly $2.8 trillion in reserves at the end of 2015. What’s more, Social Security has run at a surplus since 1982 and is projected to do so through 2019. In other words, for the next three years, Social Security’s income from taxes and investment revenue will exceed the cost of the benefits it pays out.

Unfortunately, that’s where the good news ends. In the year 2020, Social Security is projected to start running annual deficits, which are expected to grow quickly and continue for the foreseeable future. In order to pay benefits, reserve assets from the trust fund will need to be redeemed. As a result, the Social Security trust fund is expected to be completely depleted by 2034. After this point, the incoming tax revenue will only be enough to cover about three-fourths of promised benefits.

To be perfectly clear, the reason Social Security is expected to start running annual deficits and eventually run out of money isn’t because of fiscal mismanagement or anything of that nature. Rather, it’s a simple cash flow problem.

It all starts with the post-World War 2 “baby boom.” During the time period from the end of the war until about 1964, babies were being born at some of the highest rates in modern history. To illustrate this, here are the total fertility rates, defined as the number of babies born per woman throughout her lifetime, based on the birth rate of that year, throughout our recent history.

As you can see, there was a huge uptick in the number of babies being born in the post-war decades. Since then, the total fertility rate has held steady at around two children per woman.
The baby boomer generation is generally defined to be Americans born between 1946 and 1964. Therefore, this group represents Americans ages 53 to 71 today. In other words, this is the group that is starting to retire now, and will continue to reach retirement age over the next decade and a half. 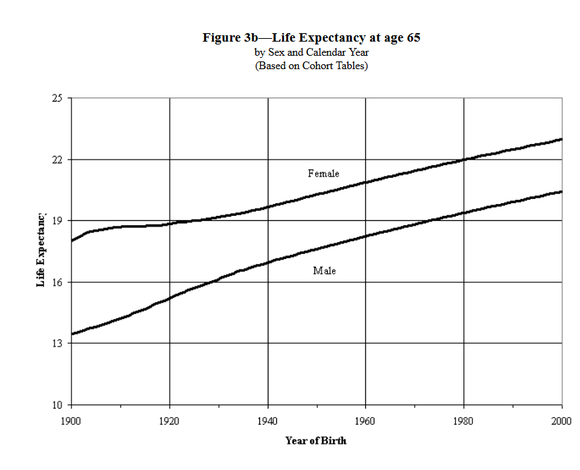 The other contributing factor to Social Security’s expected financial woes is that modern medicine has resulted in Americans living longer lives and therefore collecting Social Security benefits for a greater number of years.

According to the Social Security Administration’s (SSA) life tables, a man who was born in 1900 lived for about 13 years after reaching the age of 65. However, a man born in 1960 (a member of the baby boomers I discussed earlier) is expected to live roughly 18 years after reaching 65 years of age. And the life expectancy improvement is nearly as dramatic for females as well. In other words, the current group of retirees is expected to collect Social Security benefits for almost five years longer than the group of retirees 60 years prior.

And this trend is expected to continue going forward. As you can see in the chart below, the average person born in 2000 will live over two decades after reaching the age of 65. 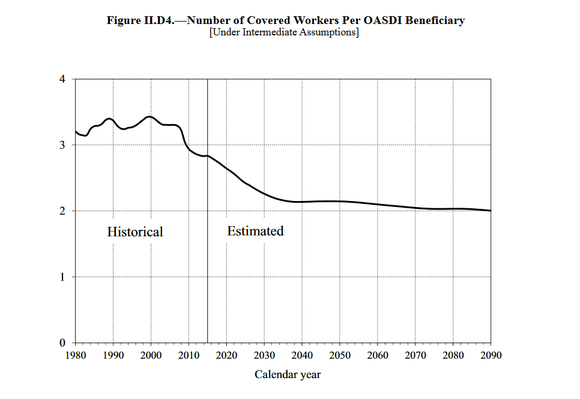 More money flowing out than coming in

As you can see, from 1980 until almost 2010, the ratio stayed steady at 3.2-3.4 workers paying into Social Security per beneficiary. As of 2016, this ratio has already dropped well below 3-to-1, and is expected to decline rapidly over the next few decades, reaching a level of just 2.2 workers per beneficiary by 2035.

What can be done?

The good news is that there is still time to fix the problem, and there are two main ways it can be done.

• Decrease benefits, which could come in the form of an across-the-board cut, or increase the full retirement age, cut benefits to wealthy retirees, or several other ways.
• Raise Social Security taxes. The current tax rate is 6.2% for employers and employees, assessed on up to $127,200 of earned income. So, a tax increase could either be a higher tax rate or a raising or elimination of the taxable wage cap.

There’s no way to predict the eventual reform package that will be passed, but history tells us that something will be done. It’s just a matter of how long it will take Congress to act and what the eventual solution will look like.