My Comments: 45 million people is a lot of potential voters. That’s the number of American receiving retirement benefits every month. As 2035 gets closer and it becomes obvious changes have to be made by Congress to maintain Social Security, how many of those potential voters are going to elect someone willing to let Social Security die?

Given the state of politics today, I’m betting a lot of them will.

These words from Christian Weller will help you better understand the economic and social forces at work that predict a massive failure at the national level if changes aren’t made. The changes can be relatively painless, as were the last changes made back in 1983.

At the time I was married with a young son and daughter and a wife who worked part time. The immediate threat was that the Social Security System was doomed to fail without some changes. So changes were made, I never felt any pain, our parents breathed a sigh of relief, and now here we are again, some 40 years later, a new doomsday scenario on the horizon, and a fix that’s manageable.

Will we actually vote for representatives and senators committed to a fix? Who knows?

Social Security’s trustees released their annual report this week. The program faces a manageable long-term financial shortfall after 2035, after which it can still pay 77% of promised benefits if nothing changes. Importantly, part of this shortfall is due to the growth and persistence of massive income inequality that have been a hallmark of the U.S. economy for much of the past three decades.

The importance of Social Security benefits for American families’ financial security has in fact gone up as low-income and middle-income families face increasing financial struggles and find it harder to save. Incomes at the bottom and in the middle have grown only very slowly. And incomes have become less stable. The likelihood to experience a sharp drop in income in particular has gone up.

Both few income gains and high income instability often stand in the way of workers saving for their future. They cannot save much, especially since they already struggle to pay for basics such as health insurance, but workers also regularly need to dip into their savings to pay their bills when incomes unexpectedly go down. As a result, low-income and middle-income families not only have less economic security now, but they are also economically less mobile and face more hardships in retirement than workers in the past did. Social Security’s guaranteed, progressive benefits are one thing workers can count on.

Yet, income inequality adversely affects Social Security’s finances at time when American families need Social Security benefits more. Income inequality rose starting in the 1980s and remained persistently high in recent decades. Income growth at the bottom and in the middle of the income distribution have slowed, but accelerated at the top and grown faster at the top. 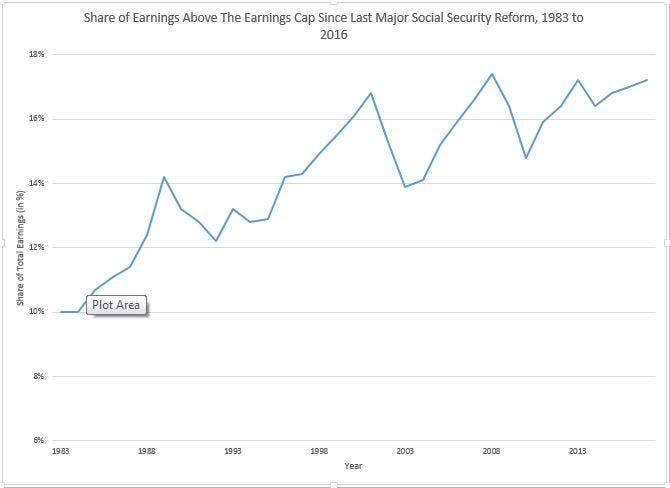 Finally, more income inequality has also gone along with less economic mobility. Over the past few decades, it has become harder for workers starting out in the bottom and the middle of the income scale to move up to higher income levels over time.

Second, low incomes and slow income growth contribute to adverse health outcomes and the chance of becoming disabled before reaching retirement age. This increases the demand on Social Security benefits.

The flipside of this link between income and health is that life expectancy has increased more for high-income earners than for low-income earners. This creates inequality of Social Security benefits paid out over people’s life time and can increase costs to the program.