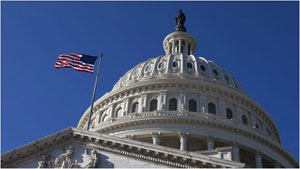 My Comments: There is far more at stake here than making Trump become relevant again. Apart from my personal, visceral fear that we’ll find ourselves in another brutal and painful war, the standard of living across these United States is eroding.

Unfortunately, that erosion is like watching a car rust. It can sit in your driveway for months and you see nothing, but give it a few years, some rain, and holes will appear.

I have no magic bullet to solve our national dilemma. There probably isn’t one to be had. All I know to do is somehow keep pushing to support the values I hold dear, and maybe, just maybe, there’ll be enough of us to bring it around.

Let us give Donald Trump a pass. The last time Congress enacted a serious law was more than seven years ago, which was well before he turned up. That was Barack Obama’s healthcare reform, which is turning into Mr Trump’s nightmare. He just cannot get that law off the books.

Congress is a sausage factory that has forgotten how to make sausages. Now Mr Trump wants it to make the largest sausage imaginable: a big tax reform package. But what does Mr Trump know about sausages?

The answer is little. Passing serious bills requires the clarity of Ronald Reagan, the grit of Lyndon Johnson and the patience of Job. Mr Trump lacks all three qualities. In contrast to his attacks on critics, such as what he describes as the Fake News media, Mr Trump’s promotional skills are limited.

It is hard to think of a memorable Trump tweet on tax reform. Mr Trump is better at tearing opponents down than building the case for change. The chances are that he will fail to pass tax reform, just as he has failed to repeal and replace Obamacare.

But the blame for this does not rest solely on the current president’s shoulders. His election followed Capitol Hill’s six most fallow years since the Reconstruction era after the civil war. Though it is America’s first branch of government, Congress has ceased to function in a serious way since 2010. The Republican party, which saw its role as stopping Mr Obama from passing anything, even if he had gone more than halfway to meet them, bears most of the responsibility. Failed initiatives include an immigration overhaul and fiscal reform.

Having acquired a habit of blocking, Republicans have forgotten how to score. But the one thing that unites Republicans of all kinds, Mr Trump included, is the strong desire to cut taxes. It does not matter much how they are cut, or which ones are targeted. The party’s sole ideological glue is a desire to lower them. Other pieties, such as balancing budgets, are easily dispensed with. It ought to be a simple matter, therefore, for Mr Trump to build momentum around a big tax cut and damn the consequences. Yet his chances of success are slim. There are two reasons for this.

The first is that Mr Trump has no appetite for the intricate horse-trading required to win. This is true even at the best of times. But these are the worst. Mr Trump is increasingly distracted by the Russia investigations, which absorb most of his bandwidth. According to aides, Mr Trump spends most of his evenings watching recordings of cable news shows just as obsessed with Russia as he is. He then calls around friends in New York, Florida and elsewhere to comment on how unfairly he is being treated. Mr Trump’s obsession with “Fake News” criticism is his first, second and third priority. Anyone who doubts that should analyse his tweets and the odd hours at which he sends them. Tax reform does not feature.

The second is that Republicans are no longer a governing party. To be fair, this holds only at the federal level. There are plenty of Republican mayors and governors who do a good job of solving practical concerns at the local level. But the national party knows only how to stop things from happening. In the past six years, Republicans voted dozens of times to repeal Obamacare in the safe knowledge Mr Obama would veto their bill. Not once did Republicans sit down and work out a plan of their own. Healthcare is a dull subject to anyone who lacks interest in policy. Republicans have no interest in policy.

Instead of a party of sausage makers, Republicans have become a party of vandals. Words such as “abolish”, “repeal”, “smash” and “erase” trip off the party’s tongue. That is what comes from a habit of shutting down government and taking the US to brink of debt default. Terms such as “build”, “consult”, “trade-off” and “draft” are rare indeed.

Even something as simple-sounding as cutting taxes requires coalition-building. Besides, Republicans have to increase the US debt ceiling before they can turn to tax cuts. Mr Trump, who would have most to lose from a sovereign default, is unclear how to do this. Steven Mnuchin, his Treasury secretary, wants a “clean bill” to increase the ceiling. But Mick Mulvaney, Mr Trump’s budget director, wants to attach spending cuts, which would ensure no Democratic votes. Mr Trump cannot even negotiate with himself.

Students of history could tell Mr Trump that Rome was not built in a day. Yet the vandals were able to demolish Rome pretty quickly. Is Mr Trump a Roman or a vandal? Sadly that question answers itself.