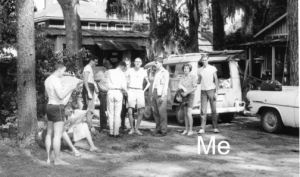 About this time some 57 years ago I arrived in Gainesville, Florida. I was a freshman with no clue yet what to study and no meaningful focus other than survive on my own with a vague sense of taking the next steps. I found myself enveloped in a group of non-conformists whose extra-curricular avocation was caving. If you were a sophisticate, you would have said spelunking, as performed by speleologists. At the time, we cavers were mostly sober and were prepared to spend much of the night in underground, sometimes muddy, bat infested caves, climbing walls and crawling through narrow passages. Never mind that you missed classes the next day. And on weekends, there were parties with purloined grain alcohol and folksongs. Some of us managed to graduate, despite having no real clue what we were going to do with the rest of our lives.

The link below will take you to a site where I have uploaded images of those days, along with comments that my now 75 year old brain thinks are relevant. Unfortunately, too many of the people shown have passed and exist only in our memories. Perhaps some of you will recognize these folks, or others with similar tastes whose lives touched yours. Good times were had and enjoyed.

Alternatively, I’ve created a PowerPoint slide show and uploaded it to dropbox.com  If you have problems with either of these let me know and I’ll try a new way to get you the stories and pictures.