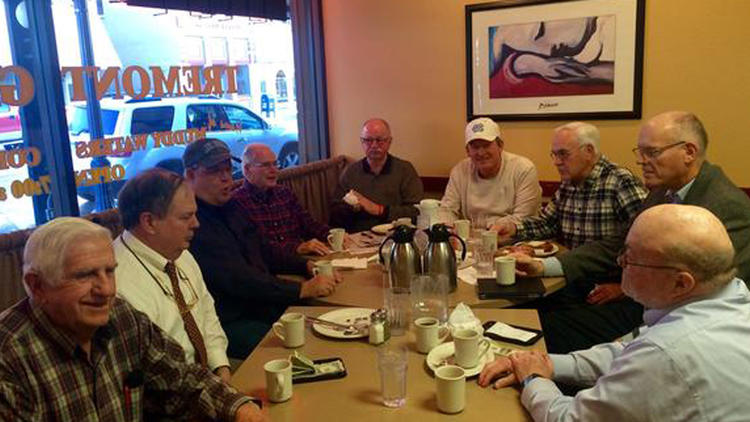 My Comments: This article appeared in the Los Angeles Times with these words as the title; In Iowa farm town, immigration debate yields surprising views. Given the political rhetoric and implications, I think this message is worth sharing.

For the longest time, life was comfortably familiar in this amiable farm community. Then, about 20 years ago, a flood of immigrants came to work in the town’s big meat-packing plant.

The change was unsettling.

At the Tremont Grille, with the presidential caucuses just days away, regulars talked about crime, declining home values and the costs of caring for those who can’t, or won’t, speak English.

The nine men seated around their usual corner table — older, white, conservative — perfectly reflect the Republican Party base, save for the lone Democrat. So their concerns were no surprise; nothing this election has animated the GOP’s core supporters like immigration.

But nobody wants to wall off Mexico, or round people up, as Donald Trump and others in the Republican field suggest.

“Some of these people came here because they were desperate,” said Ken Vinson, 65, who works at the local power station. “I don’t care how they got here, they got here, and they have a family. Now all of a sudden you want to rip those people out and send them back? I wouldn’t want my family torn apart like that.”

The immigration issue is often cast in shades of black and white, right and wrong, legal vs. illegal, as if there is no room for complexity or compromise.

But the loudest voices, amplified in the heat of a presidential campaign, tend to drown out those with more nuanced views, like the regulars at the grill on Main Street, the newspaper publisher who launched an anti-bullying campaign to prevent hate crime from coming to Marshalltown, or the police chief seeking to build trust in the Latino community.

“I hear people blustering, throwing out hurtful comments … saying things in order to get through a caucus or a primary or an election,” said the chief, Mike Tupper, who took his job four years ago because he liked the challenge of working in a culturally diverse environment. “They aren’t helping anything.”

Marshalltown is a community of about 28,000 in the rolling hills of central Iowa. Founded by European settlers, it was virtually all white for most of its existence.

Farming — corn, soybeans, hogs, cattle — has long been the major industry, but the biggest employer is the JBS Swift packing plant on the north edge of town.

Meat-processing jobs used to be a foundation of the middle-class in places like Marshalltown. But in the 1980s the industry began to mechanize production, which greatly boosted output and slashed wages.

The assembly-line toil became far less attractive, and meat processors, already facing a labor shortage as the rural population shrank, began turning elsewhere for workers. They scoured other states, then looked to Mexico and the rest of Latin America.

The first recruits were young, single Latino men who crowded several to a home. “It was like a frat house moved in next door,” said Mike Schlesinger, publisher of the Marshalltown Times-Republican, and the community reaction was “total shellshock.”

In time the new arrivals followed the classic immigrant path, putting down roots and encouraging folks back home to follow. They married and raised families and opened small businesses to serve others like them.

Today, more than a quarter of Marshalltown’s population is Latino, and there are a substantial number of Southeast Asian and Sudanese immigrants. By contrast, Latinos make up just about 6% of Iowa’s population.

Like any place, there are tensions, and some residents here are more accepting than others.

People complain that Latinos move in packs, waste school lunches — “maybe they don’t like the menu” — refuse to assimilate and contribute to a rise in violence. (Actually, the crime rate has held steady, or even fallen in some categories.)

Speaking Spanish can still draw nasty looks, said Carmen Montealegre, 48, a church secretary and 10-year resident from El Salvador. She described an older white woman at the Wal-Mart making a sound, between a huff and growl, when Montealegre addressed her husband, a Guatemalan immigrant, in their native tongue.

“Every time there is something bad, a drug deal or something, I say a prayer: ‘Please don’t let it be a Hispanic,’” said Sister Christine Fegan, who runs the thriving Latino ministry at St. Mary’s Catholic Church.

In the main, though, this is a community that has worked hard to get along.

Police are trained in cultural sensitivity. The schools have special programs for English-language learners and their parents. Volunteers put on the yearly Community Unity picnic, with the Times-Republican supplying pizza for all.

Sentiments seemed to shift about a decade ago, when federal immigration officers swarmed the JBS plant, arresting nearly 150 people as part of a national crackdown on illegal immigration. Stories circulated of SWAT teams on the roof and children coming home from school to find both parents gone.

The response was outrage. “It affected so many people,” said Tommy Thompson, the mayor at the time. “I think the method that was used was almost inhumane.”

There were community meetings, prayer services, diversity workshops and an “immigration summit” where federal officials were called to account; St. Mary’s collected $150,000 in donations to help families in distress.

For many, Latino immigrants were no longer faceless invaders, clustered in the poor part of town. “These were members of the community,” Schlesinger said, “the people you saw at school events, in church, at the Hy-Vee buying a loaf of bread.”

The plant hasn’t been raided since.

Back at the Tremont Grille, Jim Goodman found much of the candidates’ tough talk on immigration — like Trump’s vow to build a wall on the southern border and force Mexico to pay for it — to be far-fetched. Still, he welcomed the discussion.

“The wall is symbolic,” said Goodman, 65, a Marshalltown attorney. “But the concept appeals to people because it impresses them that this guy is serious about controlling the border and having a record of who’s here and who isn’t.”

It seems perfectly reasonable, Goodman and others in the coffee club suggested, to find some way to deport lawbreakers and troublemakers and leave alone the decent, hard-working immigrants they know.

“We get along fine,” said retired farmer Jim Benson, 87. “All we have to do is figure out how to make them legal.”

Norma Dorado agreed, for the most part. People generally get along, she said, and Marshalltown has been a welcoming place since she came from Guadalajara 10 years ago. But Trump hasn’t helped.

After he spoke of Mexico shipping rapists and drug dealers across the border, people began asking Dorado, “Are you going to sell me drugs?”

“They were joking,” said Dorado, 25, who works for an Iowa State nutrition program serving the Latino community. “But I wondered, ‘Is that what you actually think?’”

For some, the calls for roundups and mass deportation are more ominous. “People are afraid if Trump is elected, they’re going to come after them,” Montealegre said.

Even now Police Chief Tupper finds himself knocking down rumors — one has officers randomly snatching immigrants from Iowa shopping malls — fueled by talk on the campaign trail.

He shook his head. “Just one statement from a high-profile person,” he said, “can completely destroy everything we’ve worked on.”