There is a risk associated with when you retire that’s sometimes the fault of your parents. It’s something over which you had absolutely no control. Specifically, when you were born.

Let’s assume you’re now well into middle age, have a job that pays well but the idea of retirement is increasingly on your mind. You will need to keep busy so what other venue is there for your marketable skills. What will you do?

What follows is about the risk mentioned above. It’s called the Sequence of Returns Risk. While it helps to know about it in advance, there is not a lot you can do to minimize it. More on that later.

If you accept that you have a finite life, luck has a lot to do with how your life will play out. And it’s going to take at least some good luck to avoid this risk.

My presumption is that you’ve been finding ways to accumulate funds somewhere, with the expectation those monies will be used to help fund your retirement. You are now in what we call the “accumulation” phase of life. At some point, you’ll shift into the “distribution” phase. The risk I’m talking about here will impact you regardless of which phase you find yourself. It’s not a given but it does happen.

How will the markets in which you are invested perform? How fast will you extract money from those reserves to pay your retirement bills? How long do you expect to live? Yes, it’s a little complicated but please, bear with me. You’ll find two charts a little further down that will help you understand.

I mentioned that while you’re happy doing what you do now to earn a living, an early retirement might make for a good transition to full retirement, say at age 67. That’s when you should plan to start taking your Social Security retirement benefits. Your debt is under control, the kids are more or less grown and making their own way in life. So maybe just keep the status quo for two more years and then when you reach age 57, do something else.

Here’s a chart that shows what I call Scenario #1. This is where you put your $500k into the S&P500 and let it grow. In this scenario, you have two selves, one born in 1943 and the other in 1953. I each case you’re 57 and have left your job but have marketable skills. It’s not long before you’re generating an acceptable income so you don’t need to extract money from your retirement reserves. Just sit back and let your account grow. 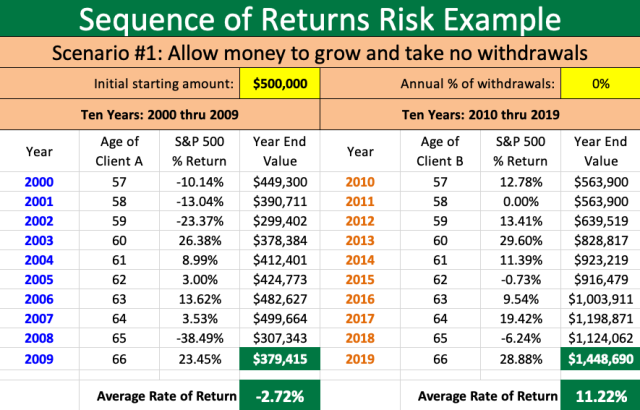 You’ve chosen to invest in the S&P500 as it generally represents the US stock market and the economy as a whole. It reflects the value of the largest 500 companies that comprise the US economy. Since you’re healthy, and with people living longer and longer, it’s no stretch to think you just might live to age 90. This gives you a long term perspective which suggests your money has to keep growing for a long time. Why not put it into an index fund or ETF that mirrors the S&P500?

This also compares your two selves. In each case you are 66 at the end of ten years. The difference is that both selves choose to start taking distributions from the $500k and the subsequent values. The idea was to start extracting 4% a year, thinking at the time it would result in your never running out of money. There’s a little issue with the IRS in the first couple of years but not too bad.

There’s a lot you can do to preserve your wealth and make sure you have money to spend if you do manage to live to age 90 or beyond. But there isn’t a damn thing you can do now to change the year you were born.

I have some suggestions for things you can do to try and mitigate this risk, but that’s beyond the scope of this blog post. You know how to reach me if you are so inclined.