My Comments: As an observer of both the stock and bond markets over the past 45 years, I can assure anyone that while there is a correlation between market movements and economic health of the nation, it is far from 100%. Couple that with an understanding that over those same years, we have seen huge increases in international trade, and the correlation between our markets and global economic health is shrinking. What this means is that a strong market does not always mean a strong economy. In our case, it is becoming increasingly fragile.

I’ve argued that increasing income inequality in this country will lead to massive frustration between the haves and the have-nots in this country in coming years. The recently enacted tax cuts that were touted as benefiting the middle class have in fact not benefited the middle class, much less those already on the lower rungs of the economic spectrum.

Wage growth is a measure of success in this country, as it is elsewhere. With more people with more mouths to feed suggests there will always be a demand for labor. But with that demand should come an increase in average wages. We right now have very low unemployment which suggests most people are already working. So if the demand for new hires is out there, how come American employers are not being forced to pay more to find people to work for them?

One reason the markets have done so well is that with the recent tax cuts, coupled with underfunding of the IRS, companies are increasing their bottom line without having to pay taxes. Some massive companies with billions of dollars of revenue are paying no taxes.

That has to end before the wheels come off and we find ourselves rioting in the streets. It will not happen in my lifetime, but without a remedy, it will happen.

Over the last three years, President Donald Trump has touted the stock market as one of his favorite scorecards demonstrating the health of the American economy.

“The best is yet to come!” Trump said in a Jan. 10 tweet, referring to the news that the Dow Jones industrial average nearing the 29,000 point threshold for the first time.

But the stock market doesn’t entirely reflect the state of the economy.

The market boom in the Trump era is at odds with the sluggish wage growth in the same stretch of time. Over the past three years, there’s been a gap between stock and wage growth in the United States that’s only widening, as illustrated in the graph below. 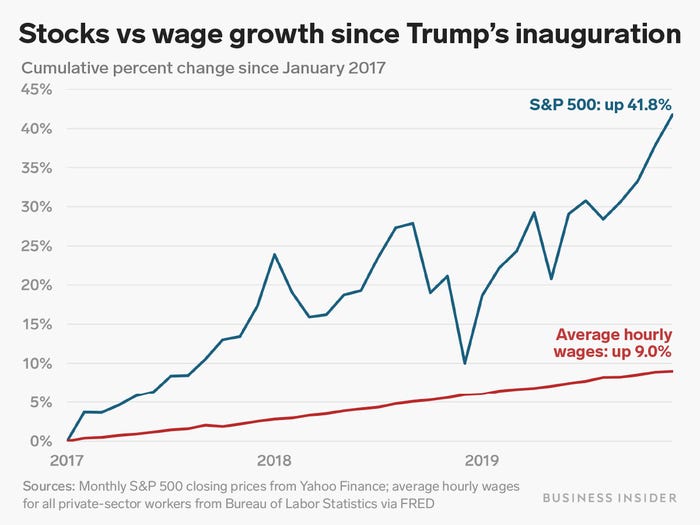 The benchmark S&P 500, widely accepted as a strong gauge of market health, has climbed more than 40% since Trump’s inauguration in 2017. By contrast, the average hourly wages of workers only climbed 9% during that period.

Even if they took home slightly bigger paychecks, employees have also confronted with the rising price tag of housing, education and skyrocketing healthcare costs some economists now compare to another tax on their income.

There’s also another huge factor locking out middle and working-class Americans from sharing in the rewards of a bull market: Half of them just don’t own any stock. The top 10% of American households own the lion’s share of stocks, around 84%.

The market trend upward does, however, hold significant benefits for people who have invested directly or through a retirement plan, as their portfolios accrue more value.

Economists increasingly say disparities between market and wage growth is the result of policy decisions made over decades by lawmakers and employers. Unions have been throttled, contributing to a rise of inequality and wage stagnation. And tax rates continue to be slashed for the highest-earning Americans as well as corporations.

Wages haven’t substantially increased despite the lowest unemployment rate since Lyndon Johnson’s presidency 50 years ago. That should theoretically compel employers to raise pay to compete for a scant supply of workers.

Recent wage gains, though, are mostly impacting low-wage workers and they have experienced the fastest pay increases. Experts say it likely has to do with the surging number of states and cities raising the minimum wage. The effective average around the country is now around $12 an hour.

Democratic Rep. Alexandria Ocasio-Cortez said in a tweet earlier this week that “the Dow soars, wages don’t. Inequality in a nutshell.” The data does suggest she is right.