My Comments: As you approach your retirement and your 62nd birthday, this question becomes increasingly relevant.

Retirement is that point in your life when you essentially quit working for money and instead money starts working for you. The challenge is to make sure it’s working hard enough to keep you from running out of money before you run out of life.

Social Security benefits have become an absolute requirement for millions of Americans to maintain an existing standard of living as they age.

You can choose to take Social Security as early as age 62 and as late as age 70. When to claim your benefits is a question many retirees take a long time to consider. To make the best decision, it’s important to look at how your monthly benefits change based on when you begin receiving them. 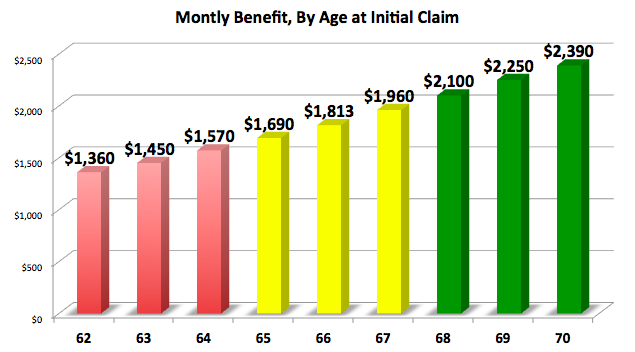 As you can see, those aren’t small differences. On the one hand, if you wait until age 70, your monthly benefit will be a whopping 76% higher than if you claim right away. On the other hand, if you do decide to delay your benefits that long, you’ll go almost a decade with no Social Security income coming in even though it was an option.

While there are tons of different variables that affect when you should apply for Social Security benefits, the following three questions often play an outsize role.

1. How do you feel when you get up and go to work in the morning?

This may seem like an odd place to start, but hear me out. Most people worry about having enough money to retire — that is an important concern, and we’ll get to it in a bit. But there’s one big blind spot to tackle first: hedonic adaptation.

You’ve likely heard hedonic adaptation being used in the context of getting used to lifestyle improvements, as in, “Even after buying the new car to keep up with the Joneses, Mark was still miserable — that’s hedonic adaptation for you.”

But in truth, it works both ways: We can have much less materially, and not be nearly as depressed about it as we’d expect.

If you want proof, I point you toward a Merrill Lynch/Age Wave survey that came out in 2015. When respondents of different ages were asked how often they felt happy, content, relaxed, and/or anxious, here’s how they responded:

And lest you think that this was just a survey of wealthy respondents, it was “nationally representative of age, gender, ethnicity, income, and geography.”

The bottom line is that if you hate your work and you can make ends meet on Social Security plus other sources of income, you shouldn’t wait to apply for benefits.

Of course, we can’t forget entirely about money. In the survey mentioned above, 7% of retirees said retirement was less fun and more stressful than pre-retirement years. The main culprit: financial concerns.

Almost all retirees report spending less in retirement than while they were working, and these expenses continue to fall as people age. Of course, everyone has heard about rising healthcare costs — and it’s true that healthcare expenses do jump. But there’s a host of other realities that keep costs down: less money spent on transportation costs commuting to and from work, a drop in food costs as you can make your own food more often, and a house finally being paid off in full, to name a few.

In general, you’ll need to calculate how much income you’ll get from three streams:

The “other” forms of income could come from rental properties you own or even part-time work.

The bottom line is that you should try living for six months on this income to ensure that it’s suitable.

3. Have you coordinated with your spouse?

Finally, we have to deal with the sobering reality that one partner often lives longer than another. In that situation, Social Security has a simple rule: The surviving spouse gets to either keep his or her current benefit, or assume the benefit of the deceased — whichever is larger.

It’s important to remember that, statistically speaking, wives will live longer than their husbands. And if husbands were the higher earners, they may want to consider waiting as long as possible to claim their benefit, as it maximizes what their wives will receive after they pass away.

In this respect, there are a dizzying number of variables to consider, and I suggest doing further reading to figure out which will be best for you and your partner.

In the end, if you can answer these three questions accurately, you’ve got a good grasp on the factors affecting when to claim Social Security benefits.