My Comments: I make no claim to being clairvoyant. I can assert, however, that until recently, I spent 45 years as a self-employed professional in financial services and have a basic understanding of how the investment markets work.

What many observers miss when commenting is that those of us who are retired don’t have decades in front of us to absorb the inevitable ups and downs of the markets.

If you have employment income that pays enough to keep you alive, the inevitable ups and downs of your retirement savings can be concerning, but not life threatening. Once you retire, that dynamic changes.

I’m far more concerned about being able to pay my bills 5 to 10 years from now than 30 years from now when my retirement might start. That being said, I fully expect us to experience another significant downturn in the markets before this year is over.

Note to readers: We published this article on September 1st, prior to the selloffs on the 3rd and 4th.

Despite new signs that the U.S.’s economic growth will be slow and painful, the euphoria we’ve seen take hold of markets over the past few months has now started to accelerate. Investors who are already overexposed to the stock market are loading themselves up with even more risky assets, even as we closely approach a volatile election season.

The Put/Call ratio, which measures the ratio of bearish versus bullish options bets on the stock market, has fallen to record 2-year lows repeatedly over the past several months. This reflects the fact that speculative activity is the highest it has ever been over this period as SPY (orange line) has climbed to new record highs:

This confirms everything we’ve written over the past several weeks. It is increasingly important that investors consider the psychology and behavior currently driving the markets higher, and why it is unsustainable.

This week, one analyst on TV said, “We have to be comfortable in being uncomfortable. You have to stay fully invested.” A major CEO of an investment firm said that he has “no doubt that by next year, the economy will be as strong as last year.”

Attitudes like the ones above tempt fate and will ultimately lead investors to ruin if they increase their exposure in this market. The major indices continue to depict a distorted image of what’s really going on for the vast majority of companies.

The divergences in market breadth we’ve previously highlighted have grown substantially larger during the month of August. Below, we have an hourly chart of the S&P 500 (red line) compared to its “equal-weighted” counterpart (candlesticks): 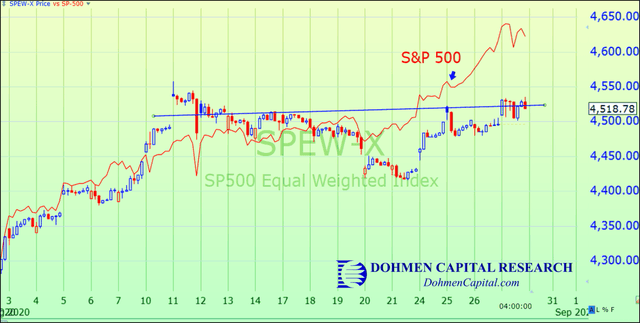 The two have veered off in different directions, with the “equal-weighted” version making a clear top and holding in a steady downtrend since August 12th.

Divergences of this sort typically signal that the markets are currently in a period of distribution. Large Wall Street firms have slowly and carefully unloaded their positions over the last 2 and a half months onto retail investors, who are walking into a trap.

A similar “distribution” trap was set earlier this year, just before the February plunge. A warning sign emerged when the S&P 500 began to diverge from its equal-weighted counterpart only a few weeks ahead of the crash.

Illusions of a Strong Stock Market and Economy

While an upcoming bear market is likely to be triggered by technical weaknesses like the one discussed above, it will be prolonged by the real outlook for the U.S. economy.

Economic indicators no longer paint an optimistic picture – now they are showing a deceleration in the recovery, coinciding with a deterioration in sentiment.

The most concerning factor of all, however, is a reduction in stimulus. The Peterson Institute for International Economics estimated that fiscal aid to U.S. households will plummet by $500 billion if Congress is unable to craft a new rescue package. The result? A further 4-5% decrease in GDP.

With the last government stimulus payments being exhausted after July, the decline we’re already seeing in the economic indicators will become even more severe. The effect will be felt throughout the entire stock market, although some will be hit harder than others.

In our latest Wellington Letter, we discuss various sectors of the economy which have seen the largest demand declines due to COVID-19. Many pessimistic forecasts at the outset of the pandemic predicted that airlines, commercial real estate, resorts and other hard-hit sectors would not recover until the end of the year.

Now, more than 5 months after the plunge, we know for certain the recovery will be much longer and worse than even the most pessimistic forecasts in March. Already, the number of large corporate bankruptcies has put 2020 on pace for the highest annual count on record, as shown below: 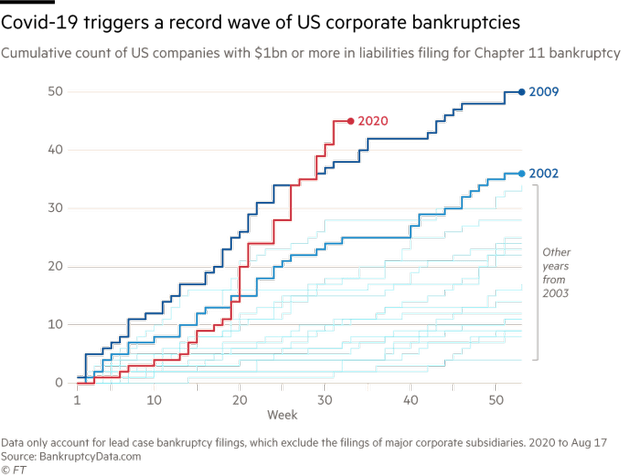 Monetary policy has grabbed everyone’s attention since Chairman Powell announced the adoption of “average inflation targeting.” The yield curve has steepened, money is flowing back into gold after several weeks of consolidation, and now everyone is discussing the prospects of big inflation down the road.

Is this really viable? One important factor to consider is the money velocity. This is the rate at which dollars exchange hands in the economy and is a critical factor driving inflation. The Fed, however, has very limited control over it.

The velocity of the money supply not only witnessed a steady decline over the past two decades, but saw a massive drop of over 20% in the second quarter of 2020, as shown on the chart below:

Trends like this are indicative that inflation won’t be going significantly higher anytime soon.

Bulls continue to hope that the economy will recover in the same way the stock market did, which is nearly impossible. Central banks can exert their powerful influence, but that only works until investors realize that artificial credit is not a substitute for genuine economic growth. In the meantime, we will closely watch markets for when this inevitable turning point emerges.

One thought on “The House of Cards is Ready to Collapse”