My Comments: I make no claims about knowing what’s going on or how the future markets will unfold. I do know that I’ve been expecting a correction for months and have been on the sidelines since the recovery began last March.

I’ve justified that because I’m more or less retired and don’t need to take risks that run counter to my assumed respect for investment fundamentals. What happens next is anybody’s guess, but…

First, look at the table below, which shows the worst market days since 1950.

Popular explanations from the financial media

All of the above are true, or at least have a ring of truth to them. Taken together, they make a lot of sense, but they leave me unsatisfied. Most of them were already known, to some extent, by investors as they drove the market higher and higher until today. That’s when the tide turned.

So, what is the explanation for today’s unexpected drop that will satisfy me? That’s next.

Over-reliance on the market’s ability to see the future

The market has a decent record of looking past bad news and moving higher in anticipation of good news. But in this case, I think the market jumped the gun. The chasm we are facing with the economy, the course of the pandemic, and the recovery of corporate revenue and earnings is far deeper and wider than many investors assumed it would be.

We’ll get past this chasm eventually, and the market will probably be the first to arrive, but not until it gives back a sizable portion of its gains. There are just too many risks and too many unknowns for the market to continue on its recent upward path.

Will the intrepid dip-buyers return to save the day?

The chart below shows that the intrepid dip-buyers have only allowed two declines of 5% or greater since the recent bottom in March 2020. Will they show up once again?

The odds are that they will, but in an environment packed with uncertainty, anything can happen. 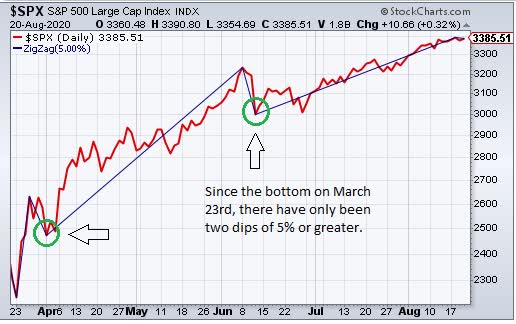 Probabilities for what comes next

I do a lot of work with probabilities. Here are a few observations I’ve made, based on today’s decline and the historical record of what has happened after similar events. There is…

As Benjamin Graham said, “In the short run, the market is a voting machine but in the long run, it is a weighing machine.” Since the recent bottom on March 23rd, investors have been voting for a speedy recovery and a return to normal. Today’s action marks the beginning of the weighing machine market.