My Comments: DOOM last Wednesday, EXCITEMENT yesterday, and now that it’s Friday, we’re somewhere in the middle and I can’t find the right word for it.

Tipping Points, as Malcolm Gladwell pointed out, can be hard to spot in advance, but when they happen things can move fast. It looks as though the market is at or approaching a tipping point right now. What happens next will be driven by the two most important narratives of the day — the attempt to reopen economic activity after the Covid-19 pandemic, and worsening relations between the U.S. and China. But a look at the markets in their own right suggests that investors have reached a point where they are prepared to believe the best.

If we compare this rebound with previous recoveries after major crashes, it is obvious that this one is little like its predecessors, even though the initial sell-off was startling reminiscent of the slump following the Lehman Brothers bankruptcy in September 2008. This chart compares the Covid crash so far with the Nasdaq Composite from the point it peaked in 2000 and the S&P 500 from its peak ahead of the Black Monday crash of October 1987, as well as the Lehman crash (which came when the market had already been in a downward trend for the best part of a year). Investors seem now to be convinced that this crash, with its unique external shock followed by its uniquely aggressive policy response, is different: 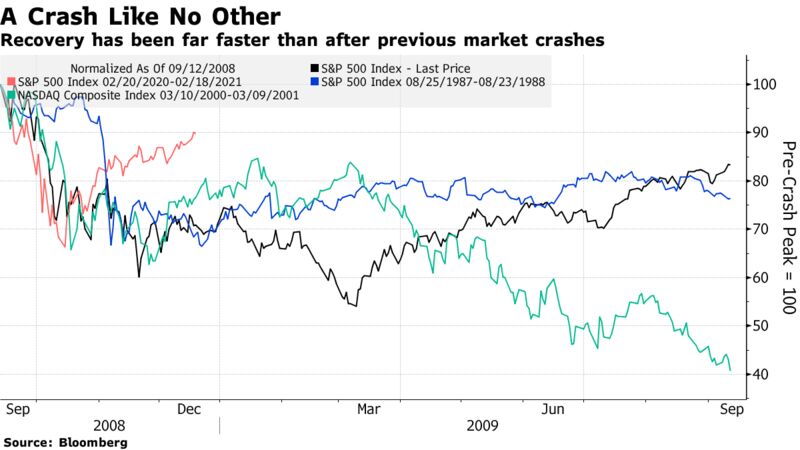 Looking within the market, we similarly see that the recovery has broadened in the last week or so, so that the great majority of stocks in the S&P 500 are now above their 50-day moving average. The hurtling downward descent has been decisively arrested, as shown in this chart from SunTrust Banks Inc.: 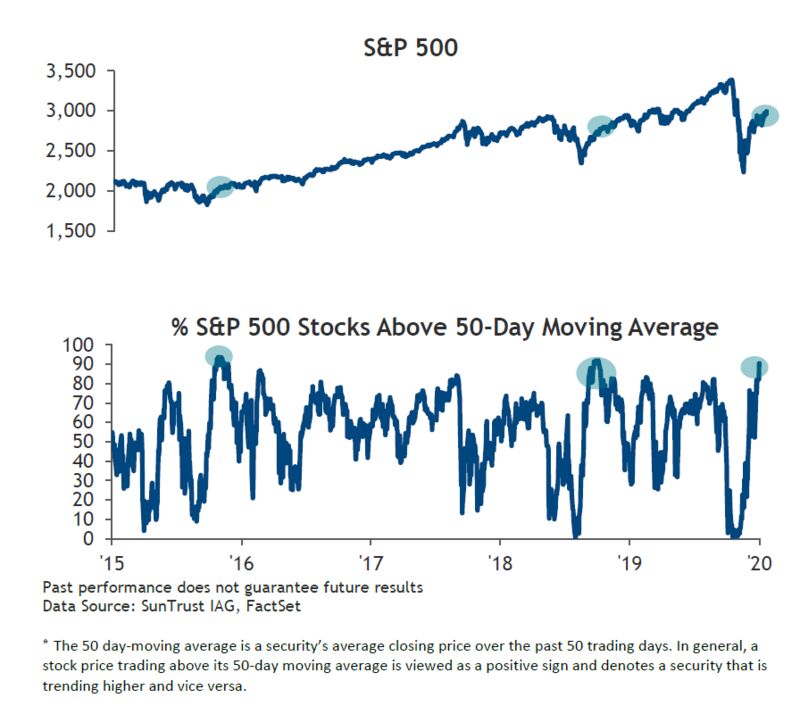 This is a technical indicator that has a long history of showing when a recovery after a sharp downturn has gained force and momentum. Past experience shows that stocks almost never fail to make further gains over the next 12 months. The only exception, as detailed by SunTrust, came after the signal was triggered in 2010; the U.S. debt ceiling crisis the next year thwarted the market’s onward progress, but not for long: 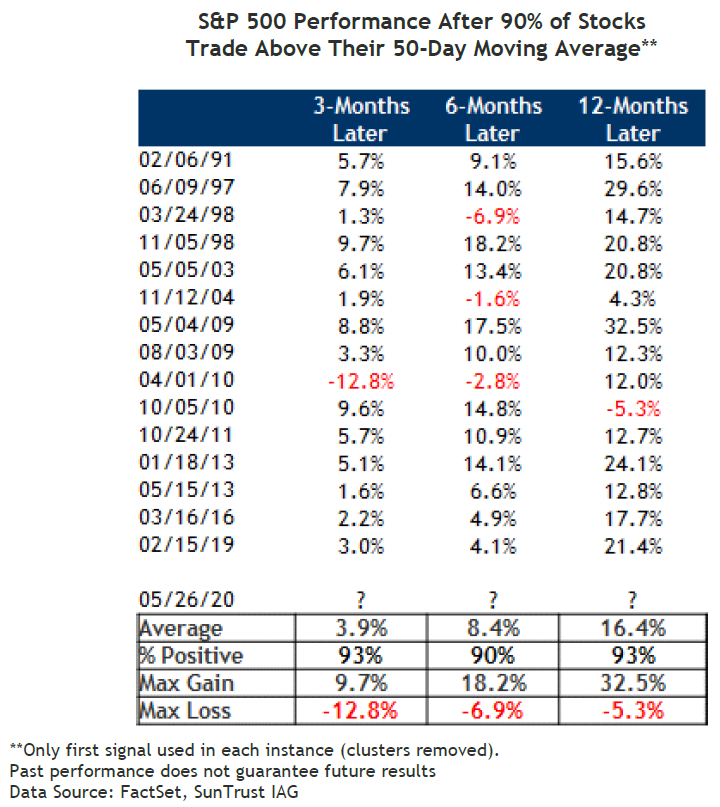 It is possible that the markets are wrong, of course, but the internal dynamics show that investors are positioned as we would classically expect them to be if there was broad confidence of growth ahead. There is genuine belief that the market can go further. It would be unwise to ignore this. Absent significant negative developments in the real world, such as a second wave of the virus or a further deterioration in Sino-American relations, there is now genuine momentum pushing the market higher.

In the last week, a tipping point in confidence has been reached. Now to see if the real world will justify that confidence.

If you want clearly good news, or at least the potential for it, look to Europe. So far, the crisis had intensified the euro zone’s centrifugal forces, pushing member nations further apart. Now, with Germany under veteran leader Angela Merkel plainly attempting to make some version of common euro zone-wide borrowing a reality, and France willingly helping, the centripetal forces suddenly seem to be triumphing. It is just possible that the pandemic will turn the euro zone into a coherent economic entity.

Very good people can argue long and hard over whether this is ultimately what the citizens of euro-zone nations truly want or deserve. For the markets it is much simpler. Assuming that the euro zone isn’t going to disband, which can only happen with unprecedented disruption and uncertainty, a Europe with a common fiscal policy to go with its common monetary policy is exactly what investors want, and would make for a stronger and more stable economy.

The moves toward “coronabonds” have had an effect on the euro, which has strengthened to a two-month high against the dollar, topping its 200-day moving average. If Merkel and French President Emmanuel Macron can deliver workable coronabonds, the euro and euro-denominated assets could be at a tipping point and ready to start a period of outperformance after more than a decade of consistently lagging the U.S.: 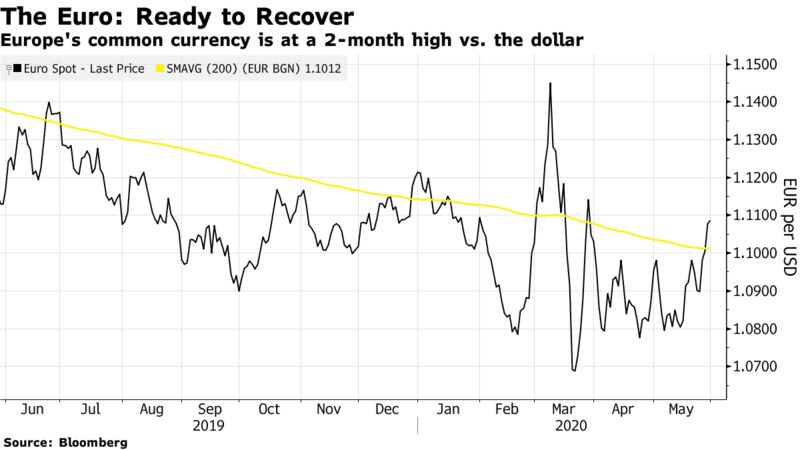 Will this happen? Perhaps the two clearest measures of what the market thinks are the price of euro-zone bank shares, which have been brutally sold off for more than a decade now, and the spread in the yields of Italian bonds compared to German bunds. One is a high-deficit country that was grievously hit by the virus, and the other a surplus nation that was relatively unscathed. In the last few days, Italian spreads have come in significantly while remaining slightly elevated; bank shares have stopped their decline and done marginally better than the rest of the market: 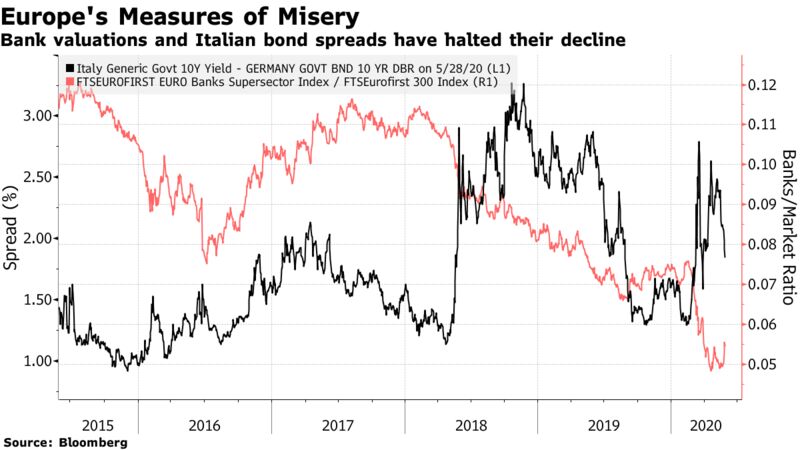 It is way too soon to call this a tipping point. But markets at present are prepared to believe that this time the EU might finally get its act together. If a coherent fiscal policy emerges, it will be great for European assets. And as it will weaken the dollar against the euro, it will also make life easier for American stocks, and for the many emerging market currencies that benefit from a weaker dollar.

Finally, a puzzle from the equity strategists at Citigroup Inc. The stock market is rebounding nicely even though cumulative flows into equity funds across the world, as measured by EPFR, are terrible: 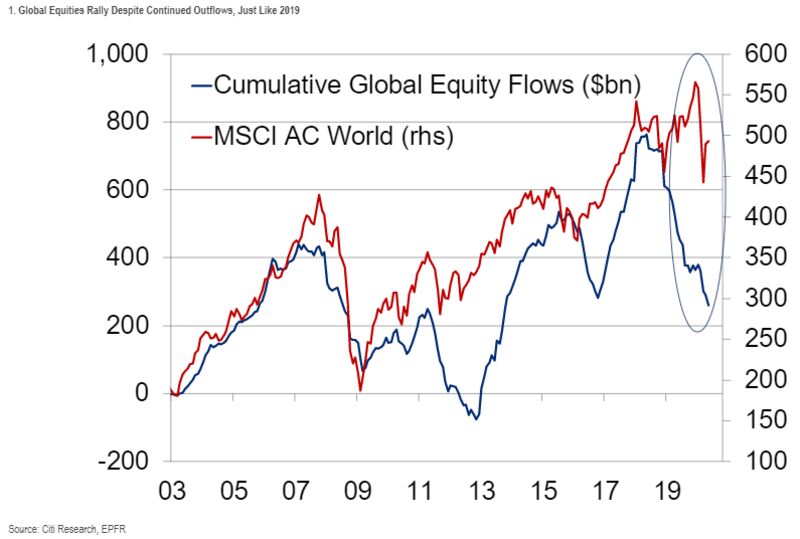 What could possibly be going on? Rob Buckland, Citi’s chief global equity strategist, points out that weak fund flows are not in themselves something to be worried about. Generally, retail investors tend to buy at the top and sell at the bottom, as the following chart shows, and so it is encouraging that they are selling at present: 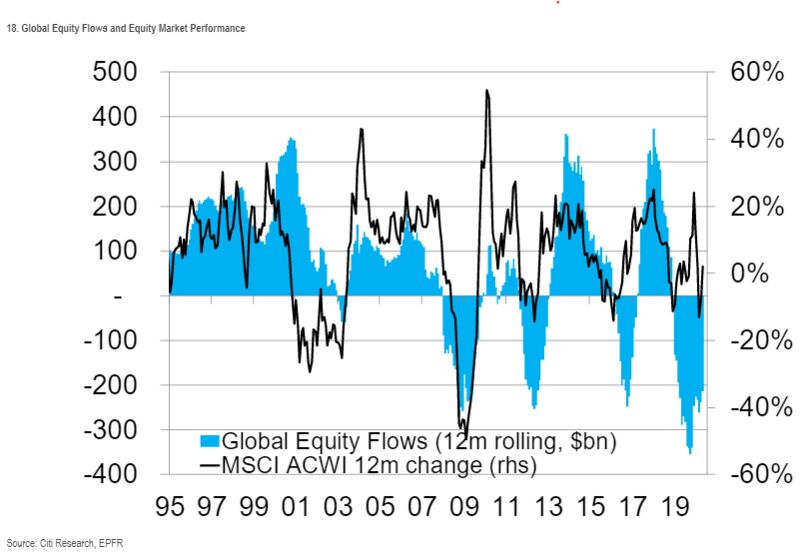 It is rather more discouraging to look at what Buckland thinks may in fact have been driving the market. If we look at Citi’s measure of short covering over the last decade, we find that it hit a peak a week or so ago. It looks very much as though this market rally has been driven by short-sellers, who enthusiastically bet against the market, deciding to take their profits while they still had some. The fact that short-sellers felt the need to do this is an interesting and positive sign — but it does suggest that the confidence that has brought the market this far is built on slim foundations: 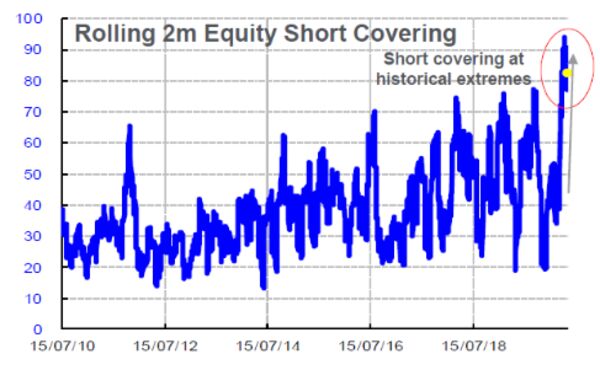 Meanwhile, the Citi strategists have also produced the scariest chart I have seen in a while. For many years, Tobias Levkovich, the bank’s chief U.S. equity strategist, has been keeping a “Panic/Euphoria” index. This is based on rigorously quantitative and unchanging criteria all of which are rooted in market prices (the NYSE short interest ratio, margin debt, Nasdaq daily volume as a percentage of NYSE volume, a composite average of Investors Intelligence and the American Association of Individual Investors bullishness data, retail money funds, the put/call ratio, CRB futures index, gasoline prices and the ratio of price premiums in puts versus calls). It is a contrarian indicator. When the market is in panic, you should buy. In euphoria, you should sell.

Incredibly, the market is now euphoric: 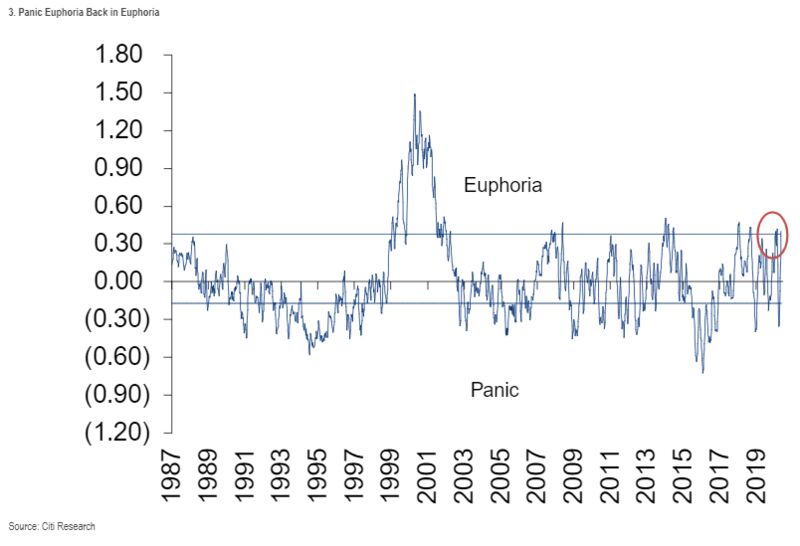 This is a mind-blowing statistic. The market is plainly behaving as though it is ready for a strong post-Covid recovery — and there are good reasons why this might happen. But the notion that the market is in a state of euphoria, now of all times, is alarming.

This might help those of you with kids who won’t be at school for at least another three months. It is indeed a terrifying prospect. If you want to get them watching something moderately educational but still entertaining enough, I suggest the History Hit podcast and website run by the British public historian Dan Snow. He will even let you sign up for his TV service for almost nothing for a couple of months and feast on a big list of approachable documentaries. Some of them include interviews with people who designed historical strategic and role-playing video games, which was enough to keep my son interested, even if it did lead to an increase in pressure to buy him more games.