My Comments: Nothing much I can add to this…

Financial markets have been extraordinarily challenging lately. Most investors were equally surprised by the market crash as well as the subsequent rebound. Both, the crash and the sharp rebound, did not surprise those who followed us here on Seeking Alpha. They were on top of both swings and know that we turned bearish on U.S. equities in early May. Long-term valuations and the business cycle remain a strong headwind for equities. Not even a single stock market correction that accompanied contracting business cycles finished within four weeks during the past 150 years. Moreover, the economic fallout from the COVID-19 related lockdowns throughout most Western economies is severe. Hence, we are most likely at a very early stage of a relatively deep recession. The drop during the first quarter of this year was probably just the first half of a bear market. Long-term valuation gauges, such as the 10-year cyclically-adjusted P/E ratio, show that U.S. equities are expensive relative to the past 150 years. Higher valuations were recorded only twice and led to the 1929 and 2000 crashes. 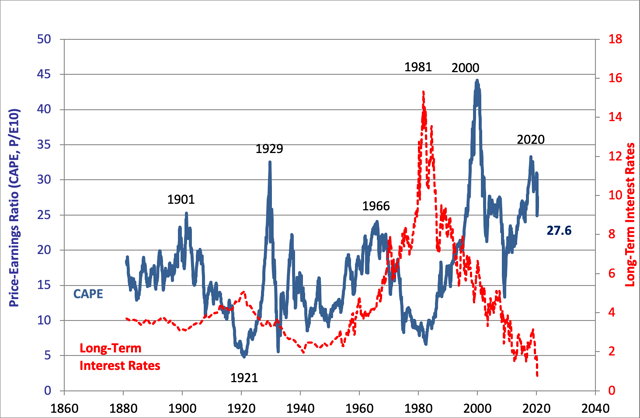 We have discussed statistical evidence regarding strong investor expectations and subsequent returns already. Below is another example that shows how strong conviction led to disappointing returns. The chart displays a Put/Call Ratio moving average for CBOE options. Options traders were only on seven instances as bullish as today throughout the past decade. Six out of these seven instances resulted in larger corrections even during a bull run. Today, we are in a recessionary environment, and the contrarian indicator may weight even more. The technical picture is not different. All boxes for bear market rallies are ticked, and equities are ready to roll over. The market needs some catalyst to sell-off. It will probably drift more or less sideways until that happens. Nonetheless, a recessionary environment is fertile for negative surprises. That is not part of the game plan for those who bought the dip because the media and investment advisors told them that stocks always go up. Stocks do increase long term but can also correct significantly. Large scale corrections are typical during a global crisis, and we are witnessing one right now. 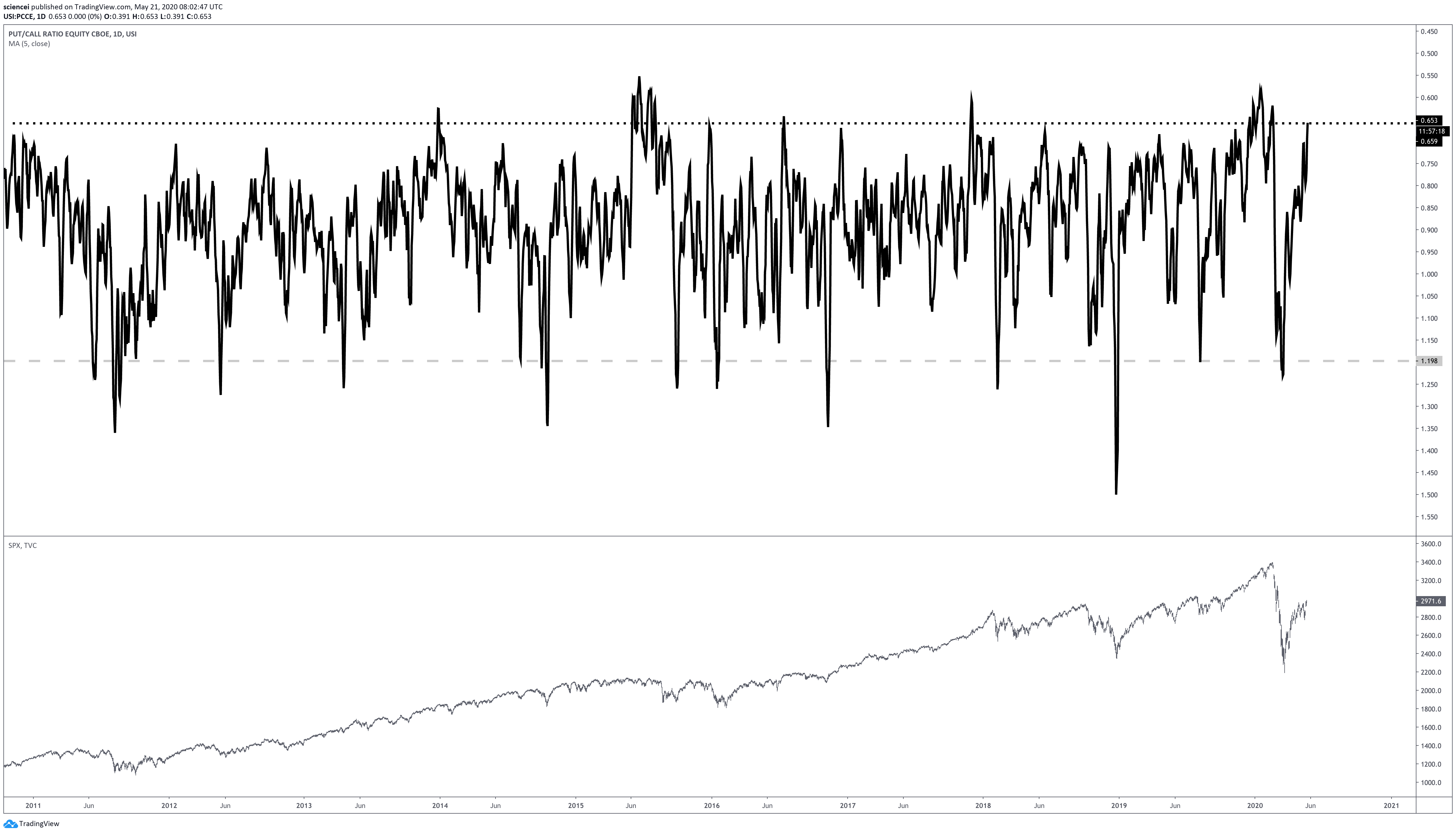 Cash and short-term U.S. Treasuries are likely to outperform during the next few months. High net worth individuals and institutions might want to go one step further and diversify their long-term strategic portfolio internationally. The benefit of doing that is the mitigation of unexpected U.S. Dollar inflation. The table below is an example of a capital preserving strategic portfolio consisting of sovereign bonds from twelve different countries and a precious metals basket. All oversea sovereigns listed in that table have less Debt/GDP and a more favorable fiscal budget situation than the USA. That takes into account that the government debt situation was the primary driver of hyperinflation and defaults historically. An equally-weighted composition costs about 5 basis points yield until maturity. That’s the cost of preserving large amounts of capital in today’s environment. 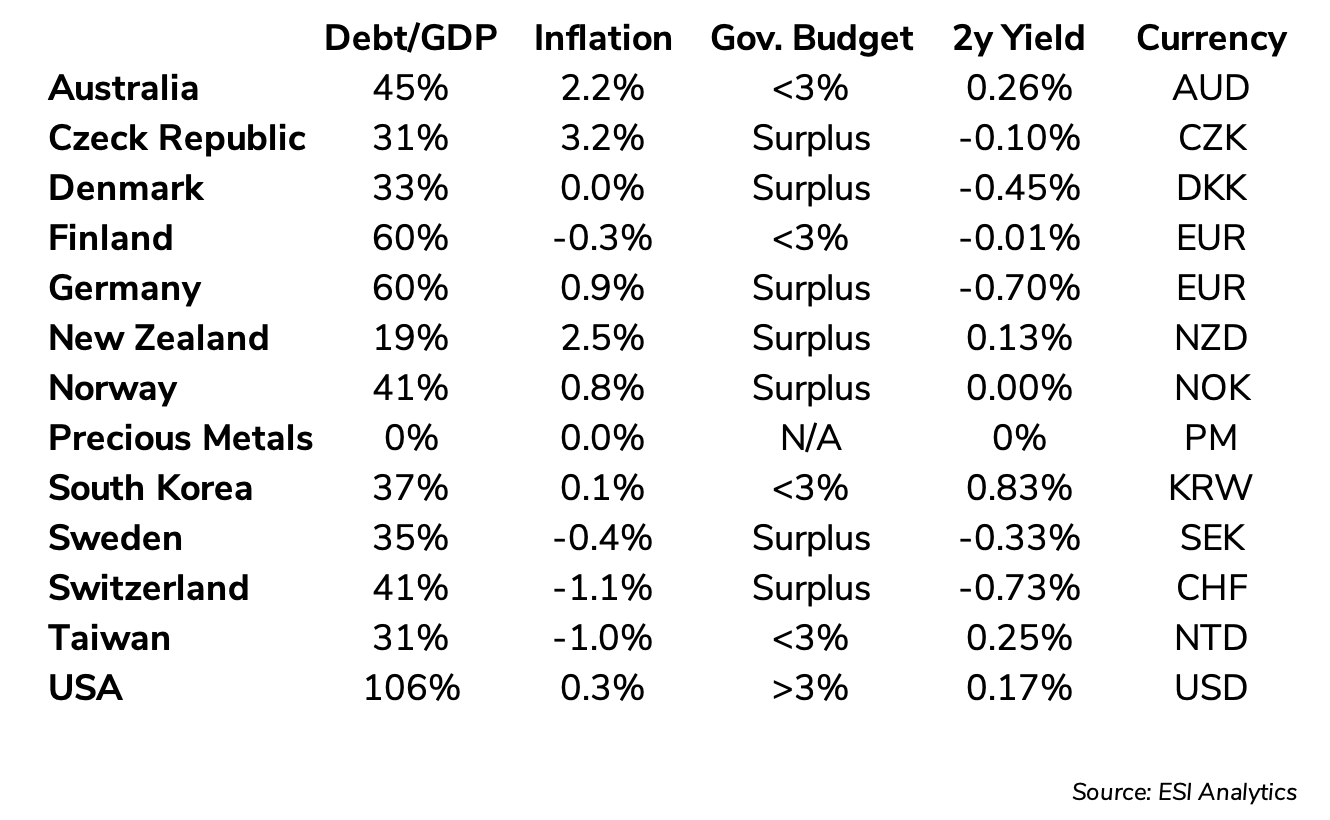 A recessionary environment with elevated equity valuations and bullish expectations will most likely disappoint equity investors. It is not the time to take bullish bets but rather keep the powder dry. A strategic portfolio consisting of an internationally diversified basket of short-term sovereign bonds and precious metals is among the best store of value for large portfolios. It preserves purchasing power by spreading assets across currencies and precious metals.