My Comments: This post expresses an opinion with respect to investing your money in the post-coronavirus world. It confirms my suspicions and offers realistic clues about where to not invest your money.

From No. 1. to BANKRUPT. In less than two years.

And it was run by top Irish chef Liam Tomlin. Lots of Banc’s customers were international businessfolk in town for work. And this was the place to go if you wanted to impress clients.

But then disaster struck. After the September 11 terrorist attacks, air travel ground to a halt. Banc went from Australia’s most-exclusive restaurant, to bankrupt in less than two years.

I share this story because it drives home a powerful lesson in disruption. You see, my goal is not only to help you profit from disruption. You must also avoid being caught on the wrong side of it.

And that’s more important today than ever before. As I’ve been saying, we’re in one of the most disruptive periods in history right now. The coronavirus has come through and absolutely annihilated some of today’s biggest industries.

Take the airline industry, for instance. CNN reports global airlines could face a $113 billion hit from the coronavirus.

Boeing (BA) went from world-dominator to pleading for a bailout in a matter of weeks. But here’s the thing. We all know airlines will eventually bounce back when this pandemic is finally over. It’ll definitely be a long grind higher… but airlines will survive.

Others won’t be as lucky. Fact is, for many industries, this crisis will prove to be the final nail in the coffin. These industries will NEVER return to what they once were.

Knowing the difference between which ones will eventually come back—and which ones have been wiped out for good—is crucial right now.

Put your money on the wrong side of this disruption, and it’ll cost you thousands. That’s why today, I’m BLACKLISTING three industries.

Filmmaker Universal recently detonated a nuclear bomb in Hollywood. Its kids film Trolls 2 became the first mainstream movie to be released online, skipping movie theaters. Families can stream it at home for 20 bucks.

Movie theaters have always held an exclusive window for film releases. They demand 90-day, exclusive rights before the movie can be shown elsewhere. In short, this is how they make money.

Filmmakers have toyed with releasing films online, but theaters always blocked it.

In 2011, Universal tried to release the film Tower Heist online when it was still in theaters. Cinemark (CNK), America’s second-largest theater chain, said it wouldn’t book the film if it was released elsewhere.

With movie theaters shut down across the country, it’s forced filmmakers to pull the ripcord and release movies online.

And this isn’t a one-off. Universal said it would no longer give theaters an exclusive period after the lockdown ends.

My friends, this is the end for most movie theaters. Theaters were struggling before coronavirus. According to data from Box Office Mojo, in 2019, Americans went to the movies less than any time since the 1920s.

Losing their exclusive window is a death sentence. Millions of folks will choose to watch movies at home instead. Five years from now, theaters will be like record stores.

In fact, the world’s largest theater company AMC (AMC) entered bankruptcy talks earlier this week. AMC and its competitors have all plunged 75%+ in the past few years: 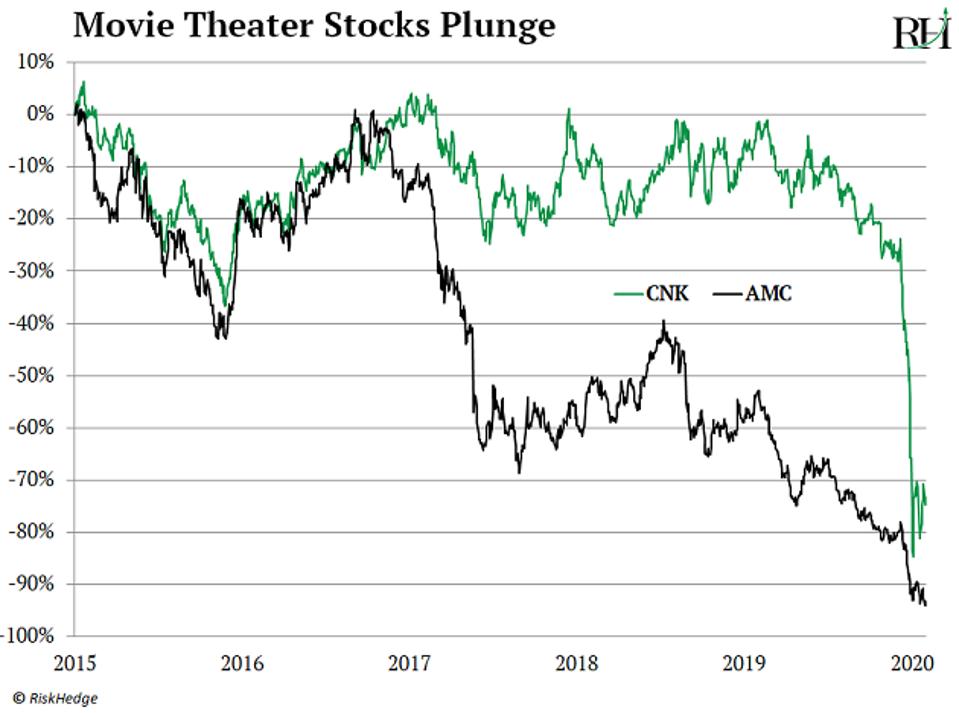 Macy’s (M) has crashed 60% since January. It’s now trading at an all-time low. In fact, it’s been beaten up so much that it’s been pulled from the S&P 500 Index! The company is now worth less than $2 billion—which is considered too small for the index.

Last month, Macy’s got “demoted” to the S&P 600 Small Cap Index. But however you classify it, one thing is clear: Macy’s is dead. And it’s not the only one.

As I’ve mentioned before, physical stores like Macy’s have been whipping boys for online disruptors over the past few decades.

Coronavirus will be the final nail in the coffin for those still standing. Thousands of shops simply won’t reopen their doors after the lockdown.

Here’s the thing… online sales have shot up 450% since 2007. But a vast majority of dollars are still spent in physical stores, as you can see here: 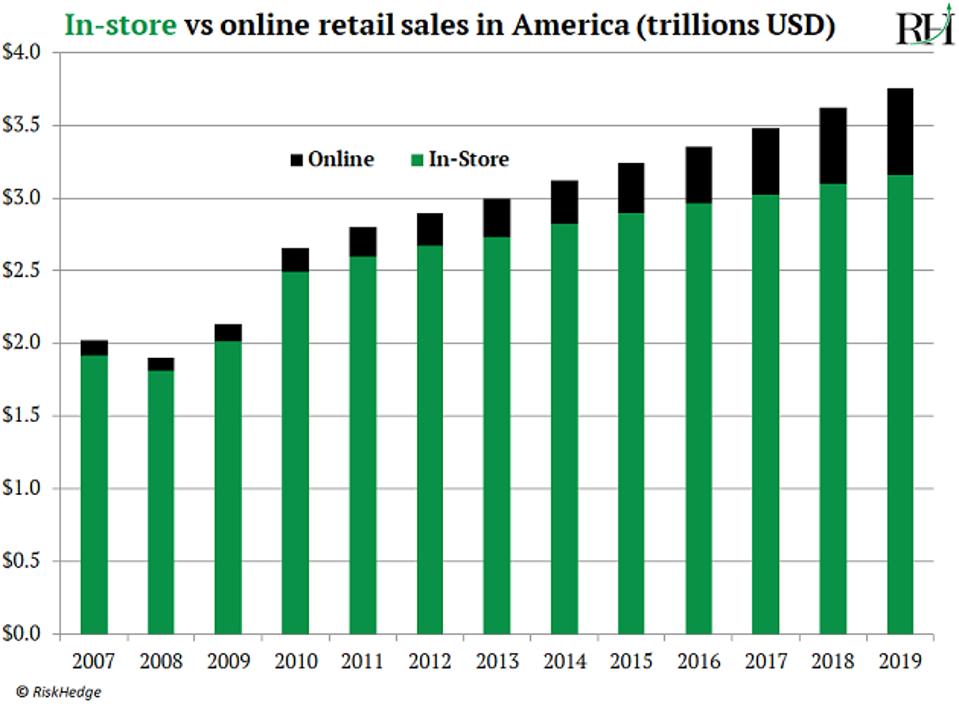 But the lockdown is forcing many Americans to buy stuff online for the first time ever. This is especially true for older folks, who are most vulnerable but least likely to shop online.

I imagine millions of folks are having an epiphany right now. They pressed a button and a parcel showed up on their front porch a few days later. They’ll ask themselves, “Wow, this is so handy. Why haven’t I always done this?”

I got a call from a good friend over the weekend. Trevor owns a haulage company in San Francisco.

He mainly works with small-to-medium sized firms and was chatting with the CEO of a business with 400+ employees last week. He told Trevor their current “remote working” setup is going so well, he’s not renewing his office lease when it expires.

Mark my words: Coronavirus is a game changer when it comes to working-from-home.

This crisis has forced the world into a mass experiment. Tens of millions of us are working from home for the first time ever.

It’s changing an entire generation’s view on what can be done remotely. After months of working from home, folks will realize they’re just as productive.

They’ll question why they need to commute to the office every day. And working remotely, say, two or three days a week will become the new normal.

In fact, when asked about remote working, Twitter’s chief HR officer told CNBC: “I don’t think we’ll go back to the way we used to operate.”

Here’s the thing. It’s not that offices will be totally empty. But the number of folks working from home is going to surge. And when 30% of your office is empty every day, CEOs will look to cut rents.

For example, the CEO that Trevor chatted with said remote working will save the company $10 million a year in rent and expenses!

This shift is a huge blow for companies that own and operate office space like CBRE Group (CBRE) and Boston Properties (BXP).

Buying up swanky offices in cities like New York and San Francisco has been a sure bet for decades. This trend will reverse as remote working “sticks” long after coronavirus.