My Comments: In the past several weeks, the only “good news” about investment markets has come from sources I consider unreliable. These are pundits and political figures I’m now convinced don’t have my best interests in mind when they stand in front of us and make unsupportable claims.

On the other hand, I’ve been waiting for the penny to drop for a long time. It’s in my hand and I’m getting tired. These following words and charts are from, I assume,  the person behind The Heisenberg Report. It’s somewhat long, is rather technical, has a lot of charts, and makes the case the penny may drop soon. And when it does, global chaos will be the likely outcome. Ignore at your peril.

COVID-2019 is spreading beyond China, and the assumed deleterious ramifications for global growth have deep-sixed the reflation trade.

But beyond any tactical considerations, it’s going to take a more severe shock to engender the type of policy response needed for a secular rethink.

“Perversely however, in order to see that capitulation into a ‘stickier’ fiscal stimulus willingness and drive an investor secular rethink, you would actually need to see things get worse first,” Nomura’s Charlie McElligott wrote Thursday.

Hours earlier, the PBoC cut both loan prime rate tenors, completing February’s round of monetary easing. The one-year LPR was slashed by 10bps, matching the medium-term lending rate cut from February 17 and the reductions to the 7- and 14-day repo rates delivered earlier this month.

The one-year LPR is now at a 30bps discount to the old benchmark rate. The balance of the outstanding loan stock in China will be converted to the LPR rate over the next several months, so each cut to the LPR (which became the de facto benchmark back in August, when its calculation was revamped) matters not just for new lending but also for existing debt. 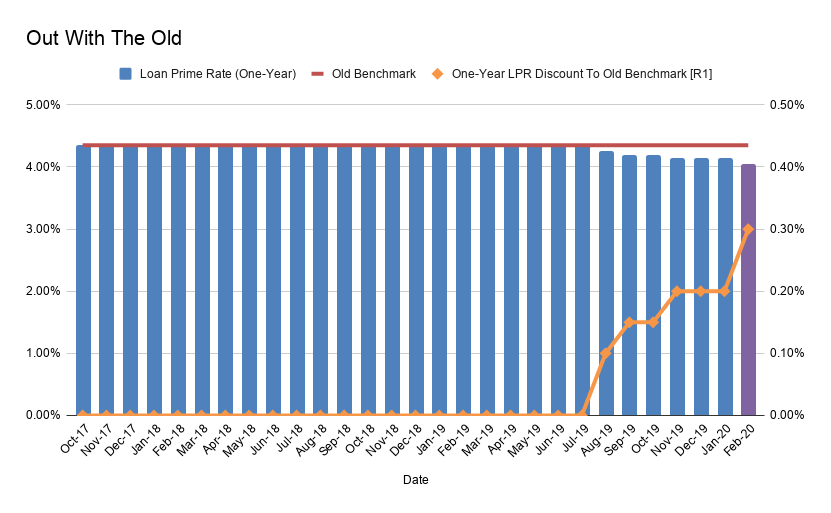 On Saturday, there were more nods to fiscal and monetary stimulus out of Beijing, as statements released following a Politburo meeting tipped proactive fiscal policy, accelerated construction projects and a move by the PBoC to allow some lenders to free up more reserves. China’s last RRR cut came in early January. Another seems imminent.

But it likely won’t be enough. Even before the coronavirus deep-sixed the pro-cyclical rotation narrative which defined the market zeitgeist in the fourth quarter of 2019, the market was already falling back into old habits, bidding up bonds, and rotating away from cyclicals in favor of the same “slow-flation” plays in equities.

The coronavirus epidemic accelerated this tendency. By mid-February, markets had fallen back in love with duration in what BofA’s Michael Hartnett called “a full capitulation into deflation assets,” detailed in the latest edition of the bank’s closely-watched global fund manager survey. 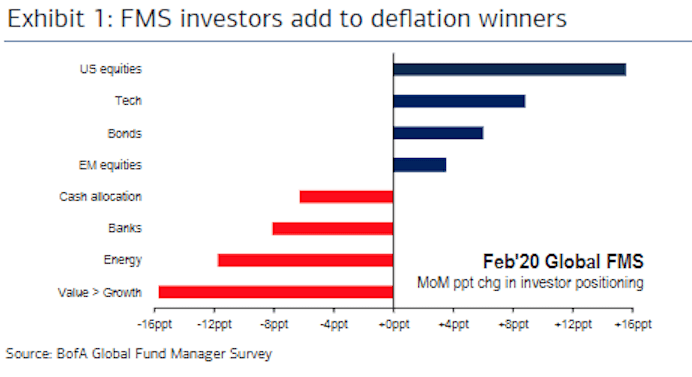 This has, of course, inflated the US equities factor bubble even further. In fact, it’s now twice as egregious as it was on the eve of the dot-com bust, by some measures.

“Our view that cyclical and value assets should rally in the first quarter was set back by the COVID-19 epidemic,” JPMorgan’s Marko Kolanovic wrote Wednesday, adding that “bonds, momentum stocks, and low volatility stocks rallied, pushing the valuation spread between defensive and cyclical stocks to a level 2x worse than during the peak of the late-‘90s tech bubble.” 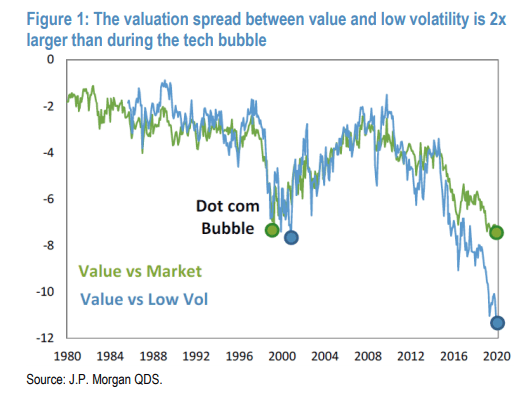 This potentially sets the market up for a snap-back similar to what unfolded in September, when, on the heels of August’s “biblical” (to quote Nomura’s McElligott) bond rally, yields reversed course, leading to multi-standard deviation factor reversals under the hood in equities.

A repeat of that episode (illustrated crudely, but effectively, in the visual below) would be the market’s “max pain” trade.

For the contrarians among you, just know that if, for whatever reason, the long-end of the US curve were to suddenly sell off, the attendant bear steepener would mechanically force an unwind in all manner of equities expressions tied to the “duration infatuation,” including, but not limited to, min. vol. vehicles, momentum products, secular growth, defensives and, obviously, traditional bond proxies.

But, circling back to the quote used here at the outset, that’s not even on anyone’s radar right now, which is precisely what makes it the ultimate, contrarian “max pain” play. Instead, the coronavirus scare has catalyzed yet another acute growth panic, and that’s being exacerbated each and every day by scary-looking visuals like this one: 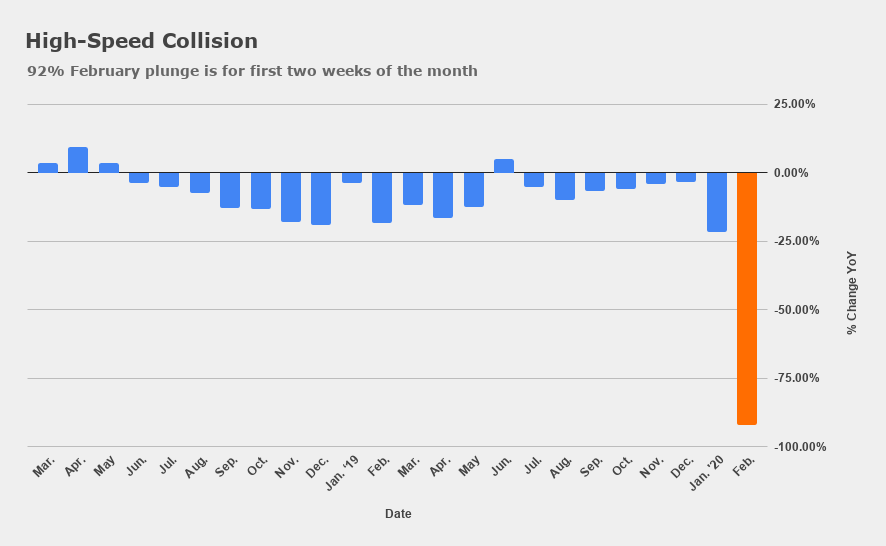 That shows auto sales in China plunged 92% during the first two weeks of February, which makes sense considering the almost total lockdown imposed across various locales. Estimates for Chinese growth in Q1 vary widely, but suffice to say the numbers are going to be very, very bad.

But what really spooked markets on Friday, was how quickly the virus appeared to show up in US PMIs. The flash reads for February from IHS Markit were alarmingly bad. Not only did the composite gauge print in contraction-territory for the first time since early 2016, the services PMI printed 49.4, a horrible miss to consensus (53.4) and the first contractionary read in four years. The word “virus” showed up a half-dozen times in the accompanying commentary from IHS Markit. 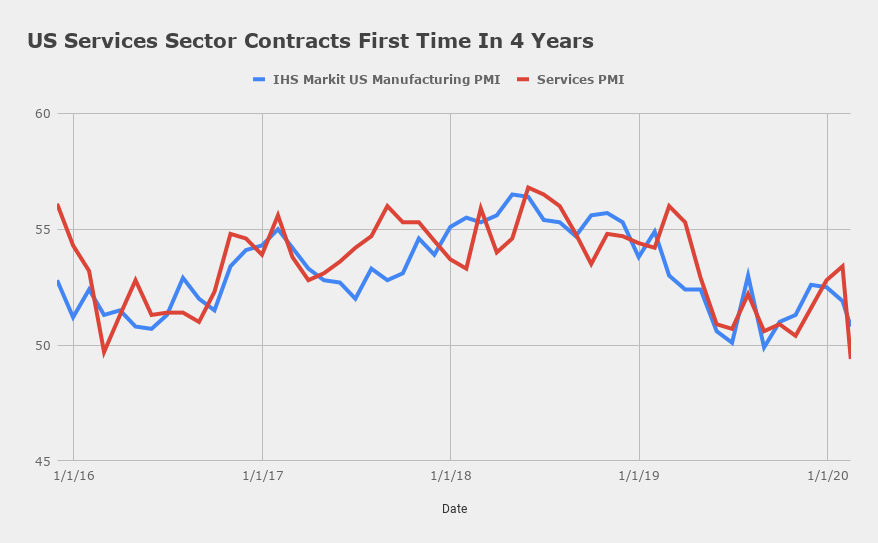 The numbers suggested the US economy, which was growing at a 2% clip just last month, decelerated to a 0.6% pace of growth in February.

This is why nobody is buying into the reflation narrative anymore and why any bond selloff (i.e., higher long-end yields) will likely prove fleeting.

“In an investor universe which remains utterly cynical about the long-term secular prospects for inflation due to the ‘3Ds,’ a ‘good news’ [trade] triggered by an easing of the coronavirus/global growth [fears] would likely require a more powerful fiscal stimulus input in order to sustain [itself] and actually cause a rethink of the current disinflationary macro regime,” McElligott went on to say, in the same Thursday note.

That is, perhaps, the most crucial point out there. As you might have noticed, 30-year yields in the US hit record lows on Friday. I’ve mentioned previously that you should be sure you understand all of the dynamics involved when you try to assess what the bond market is “saying.” Although the duration rally on Thursday and Friday was absolutely attributable in part to growth concerns and the flight-to-safety trade, buying from Japanese accounts and dealer hedging of positions tied to Formosa issuance likely magnified the move.

To the extent things have overshot to the downside (on yields) as they did in August (when convexity flows accounted for more than half of the move lower in 10-year yields, according to JPMorgan’s estimates), that makes the argument for the kind of “snap-back,” contrarian trade mentioned above stronger.

But, again, that’s likely to be just a “trade,” until there’s some reason for market participants to engage in an actual secular rethink.

At this point, most folks have given up on the idea that monetary policy is sufficient to stave off the disinflationary impulse. The February edition of BofA’s fund manager survey found more than a quarter of participants choosing Modern Monetary Theory as perhaps the only thing capable of restoring the reflationary impulse in a sustainable way. (It’s the “only Stephanie Kelton can save us now” answer.) 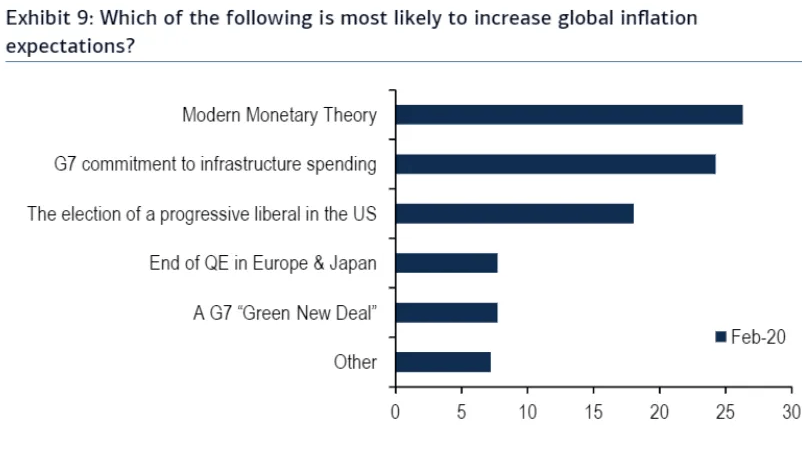 That brings us full circle, and as such, I’ll give you the longer quote from McElligott. To wit (and this is verbatim – Charlie employs lots of emphasis, all-caps and short-hand):

Perversely however, in order to see that political capitulation into a “stickier” FISCAL stimulus willingness (and drive an investor “secular re-think), you would actually need to see things get worse first—i.e. COVID-19 escalating and forcing PBoC back into a “property easing” / “PSL 2.0” policy adjustment (the closest the Chinese have come to QE); or a US recession into the election which could tilt the Presidential / Senate / House races more towards a “hard left” outcome, with potentially “reflationary” MMT- / Universal Income- / Infrastructure- odds increasing as a result (although I am personally of the view that this could create a stagflationary mess, especially as tax policy and “re-regulation” could drive an enormous NEGATIVE GROWTH SHOCK)

In the near-term, the Fed has to decide what to do. As detailed here a few days ago, the dollar’s relentless surge (which took a breather on Friday following the PMI debacle) means additional rate cuts are all but inevitable, even as Richard Clarida tried to push back on that twice this week (see here and here).

Clarida’s protestations notwithstanding, it’s going to be pretty hard to keep resisting. The 2s10s has now erased almost 25bps of the Q4 steepening, the 3-month-10-year curve has re-inverted and the market is now pricing two full cuts by year-end.

So, that’s the state of play. Are you still in the game?

3 thoughts on “Ironically, It Needs To Get Worse”