My Comments: Please note this chart appeared four years ago in 2016. I share it here to create a context for us to consider as we struggle with the pandemic and the effect it’s going to have on our economy and our way of life.

We’ve become very accustomed to what might be called “the good life”. That’s not to say some, if not many, of us are living “the poor life”, but rather to put us in mind of how many live their lives across this planet of ours with far less than we do.

As a child, I spent two years in India. I saw mass poverty that still disturbs me. I recall exiting a cab to get on a train and be accosted by dozens of children begging for change, many of them with only one arm. A parent would sever the arm of a child to make them more effective as beggars as they wandered the streets. While India has become a 20th century nation, I’m sure there are still places in the world some 60 years after my experience that haven’t changed much. In the comfort of our lives we choose to ignore them.

So as we come to terms with what has to happen in this country to recover from this pandemic, and remake our society to conform to the best interests of the vast majority of us, it helps to have a better understanding of how we got here. 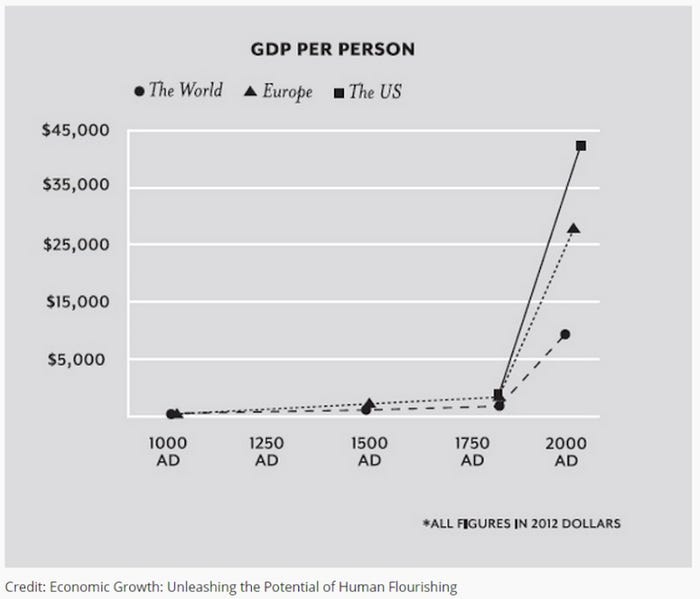 What, then, caused this Great Enrichment? Not exploitation of the poor, not investment, not existing institutions, but a mere idea, which the philosopher and economist Adam Smith called “the liberal plan of equality, liberty and justice.” In a word, it was liberalism, in the free-market European sense. Give masses of ordinary people equality before the law and equality of social dignity, and leave them alone, and it turns out that they become extraordinarily creative and energetic.

The liberal idea was spawned by some happy accidents in northwestern Europe from 1517 to 1789 — namely, the four R’s: the Reformation, the Dutch Revolt, the revolutions of England and France, and the proliferation of reading. The four R’s liberated ordinary people, among them the venturing bourgeoisie. The Bourgeois Deal is, briefly, this: In the first act, let me try this or that improvement. I’ll keep the profit, thank you very much, though in the second act those pesky competitors will erode it by entering and disrupting (as Uber has done to the taxi industry). By the third act, after my betterments have spread, they will make you rich.

Ideas matter! And if you are looking for more info — in addition to McCloskey’s work —  on what it was like before the West became a business and entrepreneur and innovation admiring civilization, this piece on how the loathing of capitalism has ancient roots might be of interest.