My Comments: I’m not usually a woe and gloom person. My glass is almost always half full. But when it comes to climate change and the existential threats we face living in Florida, I’m extremely glad our house in north central Florida is 100+ feet above mean sea level.

A potentially terrifying tool released Monday lets you look up every property in the U.S. and see precisely what flood risk it’s facing—and the risks are likely worse than you think.

First Street Foundation, a Brooklyn-based research organization, found that the true level of flood risk across the country is 70 percent larger than what the Federal Emergency Management Agency is telling people through its flood maps.

“This means nearly 6 million households and property owners have underestimated or been unaware of their current risk,” says a First Street press release.

And climate change could cause the 14.6 million at-risk properties in the U.S. to reach 16.2 million by 2050—an 11 percent increase, First Street says. 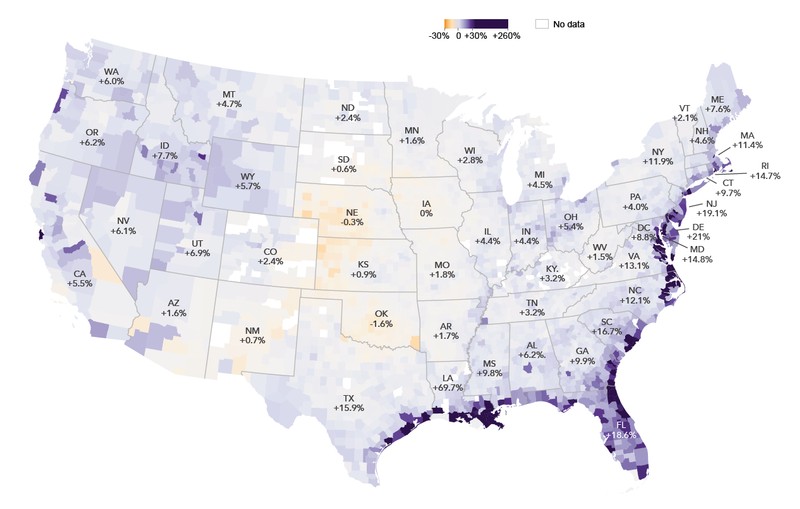 The research, made public on Monday, is the result of a years long effort by First Street Foundation and dozens of researchers and data scientists.

Now, you can look up properties yourself. Type an address into FloodFactor.com and see the current likelihood of that home or building being deluged with water. The site also predicts how much worse that flood risk will get over the next 30 years because of climate change.

Cape Coral, Florida, tops the list of cities with 69 percent of its total properties currently at risk; by 2050 that could grow to 84 percent, says the study. “It’s like Venice almost, everything is canals,” said Jeremy Porter, director of research and development for First Street.

“The number of properties within the Miami city limits are not as large as others and the city is heavily adapted with infrastructure to prevent flooding, which we included in our model,” Porter said.

For many areas, however, the risks are much larger than most people assume. FEMA estimates that 205,700 properties are at substantial risk of flooding in Illinois. First Street calculates that the true number is 451,700—2.2 times higher.

One reason that First Street calculates a much higher level of U.S. flood risk than the federal government is because potentially 75 percent of FEMA flood maps are out of date. Even the most current FEMA maps rely mostly on historical data, which might not reflect the rapidly changing rainfall patterns, sea levels, and other risk factors caused by our warming climate.

“And also their maps are highly politicized,” said Porter, referring to the pressure FEMA sometimes receives from community members and local legislators to downplay the risk; designating areas as being at high-risk for flooding can decrease property values and hurt development.

First Street’s arguably more comprehensive model, which was developed with scientists from Columbia University, MIT, and other prominent research organizations, had other surprising findings.

Chicago currently has 77,212 properties at substantial risk, which makes it third only behind Cape Coral and Los Angeles, the study says.

This has unsettling implications for the city, where according to a separate study, 87 percent of flood assistance claims come from low-income communities of color where housing is older and denser and the sewer system is less well-maintained.

“We have these histories that create these places within cities that have lower opportunities and then many of these places are often more exposed to flood hazards, and when flood disasters come they recover more slowly,” said Eric Tate, an associate professor at the University of Iowa who is one of roughly 100 researchers now studying the social, economic, and political implications of the First Street data.

The state with the greatest proportion of its properties currently at substantial risk of flooding isn’t even on a coastline: West Virginia. Nearly one-quarter of its properties are exposed. Even worse, a resilience office created to help manage the risks of the state’s narrow valleys which funnel torrential rains into communities “is barely functional,” according to NPR affiliate WKMS: “It has one employee.”

West Virginia also has an above average poverty rate, which makes it harder to rebuild from disasters such as the catastrophic 2016 floods that killed 23 people.

People like 89-year-old Imogene Welch were forced to spend years in public housing after that disaster waiting for assistance from the federal government. “I don’t know whether we’ll get anything from it or not,” Welch told the Charleston Gazette-Mail in 2018.

While income is a huge determinant of a community’s ability to recover from flooding, another closely connected factor is race. In North Carolina, where First Street calculated there are 262,000 more at-risk properties than what FEMA identifies, Black and brown people with lower incomes are disproportionately exposed to deadly hurricanes because they live in flood plains and low-lying areas. This, the News & Observer writes, is “a result of generations of redlining, racial housing covenants, and other forms of housing discrimination.”

Like the coronavirus pandemic, which has disproportionately affected Black people, flooding disasters linked to climate change are “revealing events that show the underlying disparities and vulnerabilities that were already there,” said Tate.

Those disasters can then make social inequalities even worse. When water recedes, wealthier communities often have an easier time accessing government relief assistance than poorer ones. “Richer people have the political clout to lobby the government,” said Abdul-Akeem Sadiq, an associate professor at the University of Central Florida who will be studying the First Street data to see if federal flood prevention money is distributed equally.

The textbook example of this is 2005’s Hurricane Katrina, which caused $125 billion in damage and killed over 1,200 people. By 2013, white people in New Orleans were doing better than ever—their median household grew 40 percent to $60,000. The median income for Black households, meanwhile, decreased to $30,000.

But many times a disaster occurs and there’s no official assessment of the aftermath.

“Our hope is that the realization of the substantial flood risk our country faces today and how it’s changing in the future is finally going to be understood,” First Street founder and executive director Matthew Eby said.

One thought on “This Map Shows Which U.S. Homes Will Flood Over the Next 30 Years Due to Climate Change”