My Comments: People my age tend to be less concerned about climate change than do young people. I guess it’s because by the time parts of the country become unlivable, we’ll be in our graves (they may be underwater but we’ll never know it).

Since it appears changes are underway and for reasons that appear to be unstoppable, surviving members of society are going to have to deal with it. I’ve written that it will affect retirement planning, not just for my grandchildren, assuming they reach retirement, but for many future generations.

In the near term, we’re going to see more people move to central Florida than before. We have to develop the necessary infrastructure, places to live, schools for children to attend, and all the necessary elements of life like food to eat, and water to drink.

The article below that appeared in Forbes is full of active links and images. If you want those, I encourage you to read the full article as it appeared. The URL follows just below.

I have some good news and bad news about sea level rise. First for the bad news – two pieces, one from each coast.

From the East Coast, the bad news came in the form of an excellent New York Times feature story, As Sea Levels Rise, So Do Ghost Forests. The Ghost Forests in the title are not Halloween-related but refer to trees in low-lying coastal areas that are dying off due to incursions of seawater from rising seas. Communities in these areas are struggling as much as the trees, since human roots are as susceptible to damage from rising seas as are the arboreal variety.

From the West Coast – the San Francisco Federal Reserve Bank, to be exact – comes a bad news report entitled Strategies to Address Climate Change in Low- and Moderate-income Communities . This report echoes the warnings your correspondent offered last year after Hurricane Michael devastated the panhandle of Florida, Climate Change Will Eat Your Bond Portfolio. Namely, that the financial system as a whole is at risk due to the projected convexity in the severity of climate-related infrastructure damage.

While these stories both came out this month, the effects of sea level rise on coastal communities is not a seasonal story, nor is it a recent one either.

Almost five years to the day before the Times Ghost Forest story ran, the Union of Concerned Scientists published a detailed report entitled Encroaching Tides that details the scientific community’s best estimates for coastal inundation on the East and the Gulf Coasts over the next three decades.

The bad news is clear – climate change, whose effects are now quite mild, will cause major economic and societal problems within your and your correspondent’s lifetimes. Oceans have absorbed enough heat that these climate change effects are – in my opinion and in the opinions of people whose opinions count for something – inevitable at this point.

What could possibly be the good news about inevitable sea level rise?

Thanks to the amazing adaptability of the human species and its economic expression in the form of capitalism, intelligent investors stand the chance to maintain and increase their wealth by investing in strategies to adapt to the perfectly foreseeable tragedies ahead of us.

One organization at the forefront of the push to adapt, and which is adding real value to society is the First Street Foundation, a nonprofit research and technology group using state-of-the-art computer modeling techniques to calculate and inform home buyers of the financial risks of purchasing real estate that is increasingly prone to climate change-related inundation. 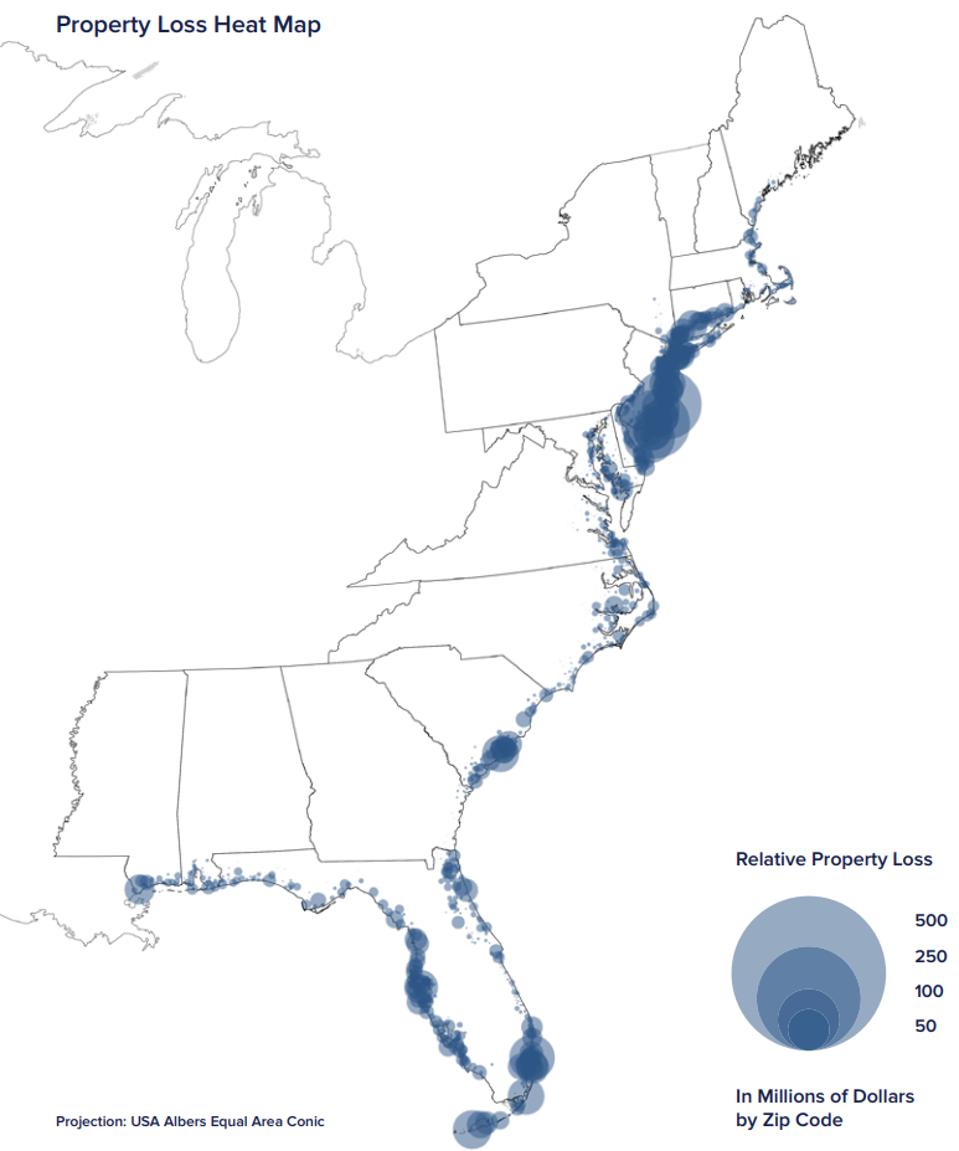 I mentioned First Street in a March article entitled That Sinking Feeling: Real Estate In An Age Of Climate Change and since then had a great talk with the foundation’s founder and CEO, Matthew Eby, as well.

As I mentioned in “That Sinking Feeling…”, First Street has already quantified the impact of increased tidal flooding on coastal home values along the East and Gulf coasts, calculating about 16 billion dollars in lost appreciation from Maine to Mississippi between 2005 and 2017 (the heat map above comes from that report).

Now, according to Eby, the Foundation, with a team of world-renowned flood modelers, researchers, and data scientists is modeling past, present and future flood risk for homes across the country. They’re calculating not only the risk from sea level rise, but from pluvial (rain), fluvial (river), and storm surge flooding as well. As a denizen of the Midwest, I know that “pluvial” and “fluvial” flooding are terms with which we will all soon be very familiar.

First Street is working to provide its house-by-house flood model to people free of charge, through its online visualization tool Flood IQ.

Eby’s group also plan to share the data with academic researchers for secondary analysis, allowing academics to quantify the national economic impacts of flooding. The Foundation plans to offset the cost of its nonprofit work by selling its flood data to for-profit businesses, businesses who wish to do internal analysis or distribute the information through consumer facing platforms, like real estate websites.

Another innovative company about which I learned about recently is called Kradle Structural Lifting Systems. Kradle’s globe-trotting CEO, George Leslie, is a former Canadian money manager who is helping Kradle’s founders to build a business around patented equipment designed to lift and level homes and other structures.

In addition to these products, Kradle also provides specialized lifting services for clients with very particular needs. For instance, it received a commission to elevate a climate research center in Greenland operated by the US Government and submitted a proposal to elevate a 500-year old European stone cathedral in danger of being inundated with rising sea levels.

(Editors’ Note: Several paragraphs follow that do not appear here. The URL to find them can be found above.)

Leslie tells me that Kradle’s order book is filling up quickly, and that the firm will likely be raising capital next year to meet working capital needs as it expands. I told him to keep my number handy when he needs a capital injection. This is a great business that already is seeing a surge of demand globally. Who wants to fund the 20,000th iPhone app when you can be a part of this kind of business?

Eby and Leslie know, as I do, that the only way to build and maintain intergenerational wealth in this century will be by investing in a new paradigm. Intelligent investors take note.